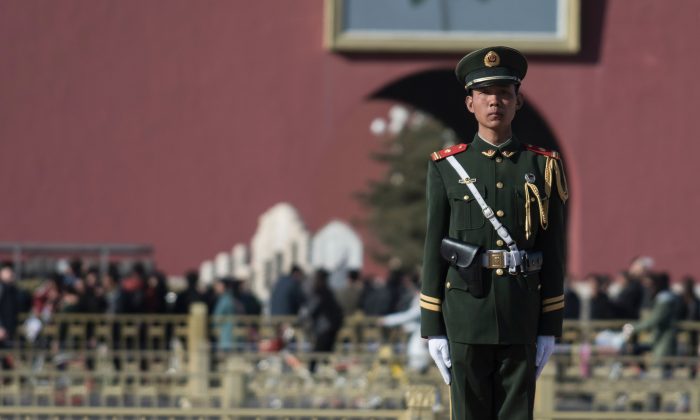 A paramilitary guard stands during the Chinese People's Political Consultative Conference plenary session at the Great Hall of the People in Beijing on March 9, 2017. (Fred Dufour/AFP/Getty Images)
Chinese Regime

Three senior members of China’s ruling Communist Party (CCP) published an open letter on Chinese social media with their real names right before its twentieth party congress. They called for the deletion of the words “CCP leads everything” from the party constitution and the punishment of party members for embracing personality cults, in a veiled swipe at the policies of the current leader.

Dong Hongyi, Ma Guiquan, and Tian Qizhuang, who now live in Handan City of Hebei Province, posted their open letter on Aug. 25 on weiquanwang.com, a website established by Chinese legal experts to advocate for citizens’ rights based on law.

They stated in the letter that the Chinese constitution stipulates that “all political parties” must abide by the constitution and the law, and the constitution authorized the CCP limited power. However, in the last paragraph of the general outline of the amendment to the CCP’s party constitution passed by its 19th party congress in 2017, the CCP added the phrase “the CCP leads everything including party, government, military, civil and academic affairs, in every sector and everywhere in the country.”

They pointed out that “CCP leads everything” was an order put out by former CCP leader Mao Zedong during the Cultural Revolution—the tightest communist control period—and it’s outdated and shouldn’t be put into practice today.

Furthermore, they stressed that no organization in ancient and modern China and abroad has ever been authorized to “lead everything,” and no one can “lead everything.” They suggested that the party constitution should promote the separation of the party and the government. They also criticized the CCP for monopolizing the election of representatives serving in China’s rubber-stamp legislature, the National People’s Congress.

In addition, they said that “party leads everything” caused a big mess in Wuhan when COVID-19 broke out, but no officials were held accountable legally, and Dr. Li Wenliang was reprimanded by the police for telling the truth about the pandemic.

They suggested, “Any party member who uses their power to engage in personality cult should be expelled from the party and be dismissed from public office.”

Although they didn’t name anyone, it is widely believed the proposal was directed at the current CCP leader Xi Jinping, who seeks another term in the upcoming 20th party congress.

One of the co-signers of the open letter, Tian Qizhuang, a retired writer from Handan City, confirmed the authenticity of the open letter with The Epoch Times on Aug. 26. Tian also posted on his account on Chinese social media WeChat about possible harassment from Chinese police: “If you [police] come to my home, you are on official business, so please bring your credentials and warrant (or handcuffs), otherwise I won’t let you in. By the way, I’ve lived a long life and not afraid of dying, if you limit my personal freedom, I will go on a hunger strike!”

Tian told The Epoch Times that the regime’s police hasn’t come to his home yet but contacted him on his WeChat account.

Quitting the CCP Is the Best Solution

Current affairs analysts praised their courage but suggested that it would be best to fully realize the nature of the CCP and completely break away from it.

Regarding the open letter, Wu Zuolai, a current affairs commentator based in the United States, told The Epoch Times on August 26, “The most important marker of constitutional civilization is the independence of the judiciary.”

Wu said that in the face of the 20th National Congress of the CCP, the cult of personality is on the rise. “It’s very timely that they publicized the jointly signed letter to the CCP as its party members. Their courage is admirable.”

Feng Chongyi, a professor at the University of Technology Sydney, told The Epoch Times, “Such a statement has no special meaning, and there are many more sharp and direct views about the CCP than this. They have always been there but being silenced because the media and the internet in China are controlled by the CCP,” he said. “The authoritarian regime is about control, and to silence voices of dissent and opposition.”

Li Yuanhua, a former associate professor at Capital Normal University in Beijing, told The Epoch Times that it is meaningless that the three men used their senior party members’ identities to give advice to the CCP, hoping it would become better.

He said that they haven’t realized the true nature of the CCP. In fact, quitting the CCP is the mainstream of today’s society. Now 400 million Chinese people have completed the “three withdrawals”—quitting CCP and its children’s and youth organizations.

“CCP is a devil that brings catastrophe to human society. It has caused great suffering to Chinese people. It’s a shame for you to be a member of its organization, you should completely leave it as soon as possible, abandon the CCP, and then have a new life for yourself,” he said.