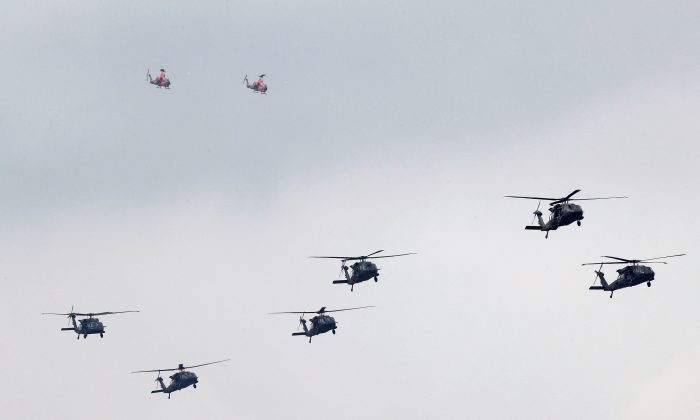 The Chinese Communist Party (CCP) may lean heavier on a gray zone warfare strategy than hard military power in its attempt to take over Taiwan after witnessing Russia’s invasion of Ukraine, China analysts suggested in a panel discussion.

“Although the gap of military spending and strength between Taiwan and China has been expanding, it seems that China is likely to use gray zone tactics to subvert Taiwan rather than an outright invasion.” Dr. Lee Jyun-yi, a researcher at the Institute for National Defense and Security Research (INDSR), said in a virtual panel discussion hosted by the Global Taiwan Institute on March 9.

Gray zone warfare is the use of carefully designed operations to achieve political gains against target states. The strategy consists of misinformation or disinformation operations, political and economic coercion, cyber attack, and provocation.

“Taiwan enjoys the blessing of geography in conventional deterrence. The fact that Taiwan and China are separated by the Taiwan Strait means that a Chinese armed attack must consist of an element of amphibious warfare,” Dr. Lee said.

“Consequently, the development of amphibious vehicles and the mobilization of troops become crucial signs for determining the intention of the People’s Liberation Army (PLA).”

This factor makes it difficult for the PLA to launch a blitzkrieg attack on Taiwan without alarming the United States, Japan, and Taiwan, or to turn military exercises into an armed attack, which is “in contrast to the Russian invasion [of] Ukraine,” Dr. Lee explained.

In addition, “Taiwan has been bolstering its national defenses by, for instance, increasing its national [defense] budget, developing asymmetric warfare capabilities, undertaking reservist reforms, and so on,” he said, noting these improvements will prompt China to rely more on gray zone warfare rather than a military incursion.

“[The CCP knows] the U.S. and Europe [are] now certainly more on edge, and they are going to be watching for things like a repeat of 2014,” Mr. Chan said in the virtual event, referring to Russia’s annexation of Crimea in 2014.

Therefore, China’s invasion of Taiwan or what he foresaw in 2021 as a “limited invasion” of Kinmen—a cluster of Taiwanese islands miles away from China’s southeast coast—is not as viable now, Mr. Chan added.

According to a biennial report released by Taiwan’s Ministry of Defence in September 2021, the PLA initiated 554 airspace intrusions by flying warplanes into Taiwan’s Air Defence Identification Zone (ADIZ) between September 2020 and the end of August 2021.

The objective of this tactic is to “subdue Taiwan’s military forces and shake the morale of the Taiwanese people and military” to “take over Taiwan without a battle,” the report said.