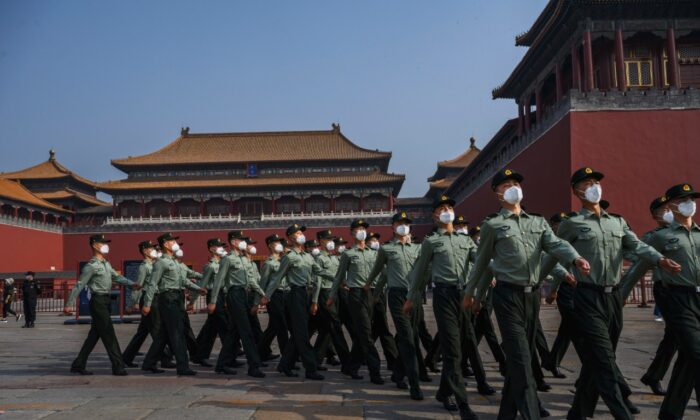 Chinese paramilitary police wear protective masks as they march by the entrance to the Forbidden City as it reopened to limited visitors for the May holiday, on May 2, 2020 in Beijing. (Kevin Frayer/Getty Images
AMERICA

“The GEC has uncovered a new network of inauthentic Twitter accounts, which we assess were created with the intent to amplify Chinese propaganda and disinformation,” Lea Gabrielle, head of the GEC, said during a May 8 press briefing.

“It’s our assessment that this network could be deployed to allow the CCP to rapidly amplify and spread messages around the world, skewing the conversation to its benefit.”

Gabrielle said it was “highly probable” that the effort was linked to the CCP, which is currently “engaged in an aggressive information campaign to try and reshape the global narrative around COVID.” This campaign, she said, involves attempting to paint the regime “as a global leader in the response rather than the source of the pandemic.”

In recent months, Chinese diplomats have increasingly taken to Twitter—a platform banned in China—to laud the regime’s efforts in combating the pandemic, criticize other countries’ handling of the outbreak, and promote unfounded theories that the virus originated from outside of China, such as the United States.

In one case, a spokesperson for China’s foreign ministry shared a video that claimed that the Chinese national anthem was played in the streets when Chinese doctors arrived in Italy—which was later debunked as a fake, Gabrielle said. The video appeared to show Italians saying, “Thank you, China,” when, in fact, they were thanking their own health care workers.

“But PRC diplomats and party-state media changed the context of the video in Beijing’s favor and then shared it widely,” she said, adding that in this case, the video was amplified by Russian-linked social media accounts.

Analysis from the GEC showed a surge in new followers of Chinese diplomatic Twitter accounts from March—when the regime escalated its global disinformation push. New followers per day rose from a historical average of 30 per day to over 720 per day— a 22-fold increase, Gabrielle said. In addition, many of these followers were newly made accounts.

“Both the sudden increase of followers and the very recent creation of many of these accounts point to an artificial network being established to follow and to amplify narratives from Chinese diplomats and foreign ministry officials,” she said.

Other indicators pointing to the accounts being part of a bot network were the fact that many of these accounts follow multiple Chinese embassies in different countries and multiple Chinese officials, and that most were created during Beijing hours, Gabrielle said.

For instance, the accounts of Chinese foreign ministry spokespersons Zhao Lijian and Hua Chunying share 3,423 of their most recent 10,000 followers, she said. Almost 40 percent of the most recent followers were created in a six-week period from March 1 to April 25.

Twitter “will continue its zero-tolerance approach to platform manipulation and any other attempts to undermine the integrity of our service,” a company spokesperson said. “When we identify information operation campaigns that we can reliably attribute to state-backed activity—either domestic or foreign-led—we disclose them to the public.”

According to Twitter, the platform recently received 5,000 accounts from the department and has conducted an initial review that didn’t find the accounts to be supportive of Chinese regime positions. Many of the accounts also belonged to Western government entities, rights organizations, and journalists. The review was ongoing, the company noted, adding that it planned to share its findings with the GEC.

In response, a State Department spokesperson said that the accounts provided to Twitter represented a small sample of a dataset of nearly 250,000 accounts.

“It is not surprising that there are authentic accounts in any sample,” the spokesperson said. “Our overall analysis is based on a confluence of factors that drive our assessment, which we stand by.”

A March study identified 10,000 fake and hijacked Twitter accounts that were part of a Chinese-linked coordinated influence campaign surrounding the pandemic.

“The true scale of the influence campaign is likely much bigger; our tracking suggests that the accounts we identified comprise only a portion of the operation,” the report by nonprofit media organization ProPublica said.