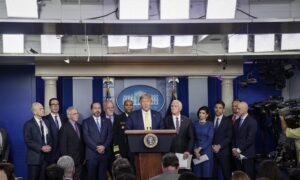 Mr. Cheng (alias) is the owner of a small business in Hunan province, located south of Wuhan—the virus epicenter. During the pandemic, he has witnessed the Chinese regime making a fortune in every possible way. He says the regime has imposed a mandatory quarantine to cover up the severity of the pandemic inside China.
–

I have relatives and friends in Wuhan. I understand the situation. Of the people I know, 7 of them have died.

It was under strict control. Two of my sisters are in Wuhan. They can’t go in or out. They have been locked in with door panels and fences. Many elderly were starved to death. Many died of starvation. This data will not be officially recognized.

No one believes in the official data, whether you are associated with the government or not.

Reporter: Are there many families where everyone has died?

Mr. Cheng: Right, right. I personally know there are 7 families that are gone. One of them was a deputy director of Jiangxia District. He died. He was infected on Jan. 6, and died on the 10th. His father and mother were in their 80s. One died on Jan. 12, the other died on Jan. 16. His wife was infected, not dead yet. He was my father’s classmate. They knew each other well.
–

Mr. Cheng: There is a logistic company nearby. For us small businesses, if we want to send out goods, we must go through these logistics companies. But they will not allow you to run a business unless you pay a fee of 5,000 to 10,000 yuan ($711.71-$1,423.42). They’re robbing people with the fee. The government is too corrupt, and we can’t do anything about it.

Reporter: The fee is making it worse for you, isn’t it?

Mr. Cheng: It’s a big blow. The market was already bad last year, now there’s no workers. The key is that you can’t get workers. They can’t come.

Some said that back to work is committing suicide. But not resuming business is a bigger hit on us. The government workers have wages. But small businesses like us are hit the worst.

Reporter: During the isolation, did people pay the fee on their own?

Cover Up the Pandemic

There are many people talking about the epidemic on WeChat, Weibo. Officials have acknowledged that more than 1,400 people have been jailed for, as they say, “spreading rumors.” That actually means that the 1,452 people were sentenced for speaking the truth. This is official data, from a report on March 6.

Reporter: Does that mean most people in Wuhan have awakened?

Mr. Cheng: How can they not be awakened, like my sister, sister-in-law, my two sisters in Wuhan. But there’s nothing you can do. Without a gun, rebellion is impractical in China.