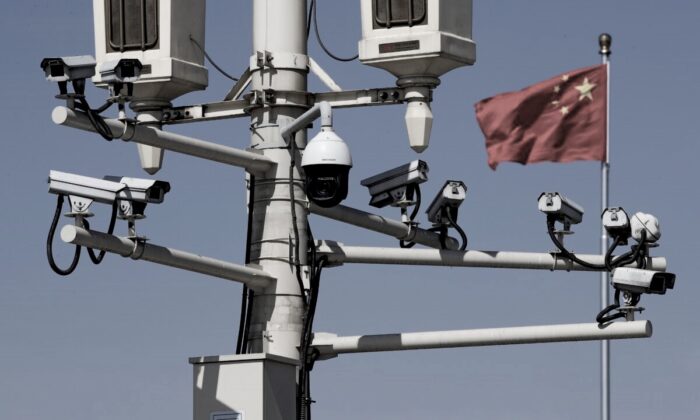 A Chinese national flag flutters near the surveillance cameras mounted on a lamppost in Tiananmen Square in Beijing, on March 15, 2019. (Andy Wong/AP Photo)
China

CCP Is Engineering a New Society to Control Human Will via Data: Authors

The Chinese regime is utilizing futuristic technologies, including digital surveillance, to shape the will of the people and control social behaviour, according to journalists Josh Chin and Liza Lin, the authors of a new book, “Surveillance State, Inside China’s Quest to Launch a New Era of Social Control.”

Systematic surveillance in China is not just for governance but also for re-engineering human behavior, particularly in societies like Xinjiang where the Chinese Communist Party (CCP) has set up an intricate web of surveillance—more concerning is that the communist regime is exporting this technology to other authoritarian regimes and countries around the world, said the authors during their book launch at the Carnegie Endowment for International Peace on Sept. 12.

“Chinese leaders have revived totalitarian techniques of the past and blended them with futuristic technologies in an effort not to eradicate a religious minority but to re-engineer it,” said Chin and Lin in their book.

“The campaign is one part of a radical experiment to reinvent social control through technology that is forcing democracies around the world to confront the growing power of digital surveillance and to wrestle with new questions about the relationship between information, security, and individual liberty.”

The authors, both senior journalists with the Wall Street Journal, said that the CCP is in control of incomprehensible volumes of personal data and it continues to collect more and more of it. It also continues to find new ways to utilize data to build what the authors called a “perfectly engineered” society.

Chin and Lin describe this perfectly engineered society in which artificial intelligence companies work in tandem with the police and where “the government has the power to track your every move with cameras that can recognize your face and the unique rhythms of your gait, microphones that can recognize your voice, and smartphone GPS systems that relay your location to within a few feet, in which government officials can scrutinize your private chat history, reading and viewing habits, internet purchases, and travel history, and can crunch the data to judge how likely you are to help or harm public order.”

Most of the surveillance tools used by the CCP to maintain power were invented in Silicon Valley where tech giants like Google, Facebook, and Amazon applied them to compile “behavioural portraits” of their users to sell to advertisers. The authors called it “surveillance capitalism,” a term first used by author Shoshana Zuboff.

While much of this surveillance system is “aspirational,” the CCP has started to realize some of it and are aware that some may never materialize. Chin and Lin write in their book that “significant pieces” of this totalitarian system have already started to take shape in several cities across China due to the giant leaps in artificial intelligence (AI).

China is about to host its next Congress on October 16 where Chinese leader Xi Jinping is likely to seek a third term. If he gains another tenure, he’ll likely push to meet his ambition of a new type of government that’s “powered by data and mass digital surveillance, that can rival democracy globally,” wrote Chin and Lin in an article in the Wall Street Journal on Sept. 2.

“Mr. Xi is pursuing this vision out of necessity. Over roughly three decades following the death of Mao Zedong in 1976, the Communist Party retreated from people’s personal lives, invested in infrastructure, and surfed a wave of historic economic growth that carried China from abject poverty to middle-income comfort,” they wrote, adding that as the growth slowed down, the pandemic raged, and the demographic situation worsened. Xi Jinping is trying to write a new social contract with his citizens.

“Rather than entice citizens with the possibility of riches, he instead offers them security and convenience—a predictable world in which thousands of algorithms neutralize threats and sand away the frictions of daily life.”

Every Chinese city has a Chengguan (The Urban Administrative and Law Enforcement Bureau) or a government law enforcement agency that’s usually part of the city’s municipality and not the city police. Among many things that this agency does it takes care of the city’s appearance. During the book launch, Lin talked about her visit to a Hangzhou city program where AI tools are used by a local Chengguan branch.

Hangzhou is at the heart of china’s modern economy and is home to China’s leading technological companies including e-commerce Alibaba Group and Hikvision, the world’s leading maker of surveillance cameras, according to the authors. The city is one of the top “smart” cities in China and collects massive amounts of data daily that it uses to manage daily ops.

“One particularly noteworthy initiative is called City Eye, in a tidy Hangzhou neighborhood known as Little River Street. The program has placed AI-enabled tools in the hands of the local branch of the Chengguan … chasing away street peddlers, punishing unauthorized trash dumps, tracking down vandals, and handing out parking tickets,” wrote the authors in the Wall Street Journal article.

City Eye started in 2017 with Hikivision installing 1,600 police surveillance cameras in Little River Street and Alibaba providing the AI-powered platform. Today the program allows the administration to keep 24-hour watch on the streets.

“Like Xinjiang, with its systematic oppression of the Uyghurs, Hangzhou serves as a pilot zone for social control, giving the Communist Party a view into what works and what doesn’t. The experiments in the two places suggest that the same technologies used to terrorize and remold those who are thought to resist the party’s authority can be deployed to coddle and reassure those who accept its rule,” the article said.