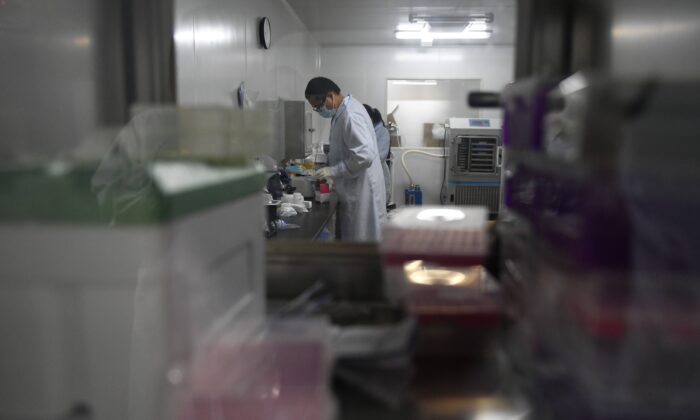 Technicians in a research and development lab at Chinese biotech company Coyote, which developed the Flash 20, a fast test for COVID-19, in Beijing, on Sept. 27, 2020. (Greg Baker/AFP via Getty Images)
Thinking About China

A growing number of biotech, genomics, and medtech firms with ties to the Chinese Communist Party (CCP) are operating in the United States, raising concerns about medical and genetic data security.

With more than $1 trillion at its disposal, China’s sovereign wealth fund has over 33 percent of the world’s total sovereign wealth fund assets. Since 2017, much of this money has been flooding into U.S. biotech companies, as part of the CCP’s Made in China 2025. The industrial policy specifically identifies biotech as a strategic industry, entitled to government financial support. Consequently, Beijing has allocated $100 billion for investment in the sector.

In 2018, China invested $5.1 billion in U.S. biotech companies, a 25 percent increase from the previous year. In keeping with the CCP’s “military-civil fusion strategy,” the People’s Liberation Army (PLA) is involved in biotech research to develop bioweapons that target specific ethnic groups. In 2019, half of China’s investment in the United States was in the health, pharmaceuticals, and biotechnology sectors, followed by financial and business services, and information and communications technology. In 2021, the number of filings for FDA approval by Chinese drugmakers was the highest it has ever been.

Much of the CCP’s infiltration of the U.S. bio and medical industries is aided by U.S. citizens and even the government. Last month, Chinese firm Andon Health Co. has received a $1.28 billion contract from the U.S. Army Contracting Command to supply COVID-19 self-test kits. A subsidiary of Andon, iHealth Labs, signed a contract with the New York State Department of Health in December for $120 million worth of self-test kits.

These purchases evoked a harsh response from Republican lawmakers. The Republicans floated a bill, which was defeated by the Democrats, prohibiting the purchase of Chinese-made COVID test kits. Chinese tabloid Global Times touted the purchases as the United States relying on China to fill the gaps in its supply chains.

WuXi Biologics, bought a Pfizer manufacturing plant in China, which will grant the company access to some of Pfizer’s data. In 2015, the firm also bought a stake in an American DNA testing company, 23andMe. WuXi Biologics now has locations in Massachusetts and New Jersey. Its drug plant in Delaware was built with a China government grant. In November 2021, WuXi Advanced Therapies (WuXi ATU) announced the opening of a cell and gene therapy testing facility, which is located in the Philadelphia Navy Yard.

The Foreign Investment Risk Review Modernization Act of 2018 (FIRRMA) expanded the jurisdiction of the Committee on Foreign Investment in the United States (CFIUS) to block investments that the government deems to pose a threat to national security. Increasingly, CFIUS has used its authority to halt Chinese biotech investments.