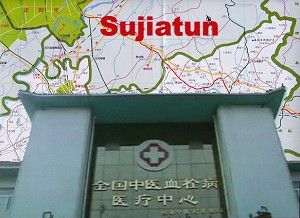 Sujiatun, where Falun Gong practitioners are warehoused prior to being stripped of their organs and cremated. (The Epoch Times)
China

Officials from the Chinese communist regime finally responded to the accusations that they are removing organs from live Falun Gong practitioners at Sujiatun Concentration Camp in Shenyang City, Liaoning Province, nearly three weeks after the incident was revealed. The Associated Press reported at a press conference on March 28 that Ministry of Foreign Affairs Spokesperson Qin Gang denied the existence of concentration camps in China and invited reporters to visit the alleged location of said concentration camp.

However, the CCP's statement regarding the Sujiatun incident was made available only to overseas media. The Chinese media has yet to receive directives from the government; hence, the general public in China still maintains that the CCP has kept silent on this issue. No word of the Chinese communist regime's response to the Sujiatun incident could be found on the CCP's Ministry of Foreign Affairs website.

Local sources disclosed that the CCP had increased surveillance around the Thrombosis Hospital of Integrated Chinese and Western Medicine in Sujiatun since secrets of the concentration camp leaked out. There are currently many plain-clothed police circulating throughout the hospital dressed as medical personnel or patients. To better monitor Falun Gong practitioners, some even pretend to be vendors in front of the hospital entrance. There are also groups of plain-clothed police surveying the residential area west of the hospital where the crematorium is located.

Moreover, Sujiatun Thrombosis Hospital of Integrated Chinese and Western Medicine is equipped with security cameras. They have on tape three men and four women walking near the back door of the crematorium. The tape has been sent to the National Security Department where analysts are trying to identify those on the tape. Subordinates from Luo Gan's 6-10 Office have also sent agents to Sujiatun, ready to arrest Falun Gong practitioners.

Our sources warn people conducting investigations into Sujiatun to use extreme caution. The CCP appears to be quite eager to arrest anyone seeking to uncover more information that it wants suppressed.