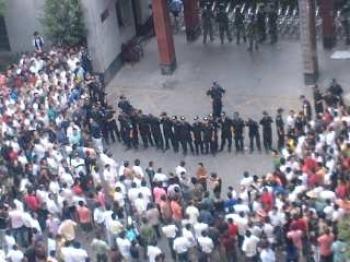 Police form a wall to block up protesting people in front of Xianxi Sub-prefecture Government on September 24. (Internet photo)
China

There were more confrontations between local Chinese Communist Party (CCP) officials and residents of Jishou City in Hunan province on September the 24th. Angry investors left penniless by an illegal loan scheme had gathered to seek help from prefecture governor Xu Keqing.

A billion-dollar investment scam has left most the city’s residents out of pocket and unhappy with a proposed rescue package.

Frustrations had been mounting for the investors who have had previous attempts at protesting quashed by a heavy military and police presence in the city.

The Governor refused to meet with the group and tried to force his way through the protesters. According to eyewitnesses an elderly woman was knocked down and dragged by his car.

The crowd over-turned the car and assaulted the driver.

Mr. Yao a local resident told the Epoch Times that the protesters were appealing to the officials to help them with the fund raising scandal.

“They requested the governor to solve their problems but he said he had other business to attend to and had no time for them,” said Mr. Yao.

But investors believe corrupt party officials were also part of the loan racket.

“The plan had the consent of the authorities. It is like stealing our money. This illegal fund raising is a case of years of companies colluding with the CCP. Many party officials put in money and earned higher interest. In the development of real estate, and such there have been a lot of behind-the-scene plots,” said Mr Yao.

According to a local activist the prefecture-level and city-level officials withdrew their investments from the scheme when they heard that the loan companies were insolvent.

This has left most others having to accept a rescue package offered by the investment company. But they are unhappy with an offer that gives them back only 30 percent of their original investment. The remaining 70 percent turned into equity shares.