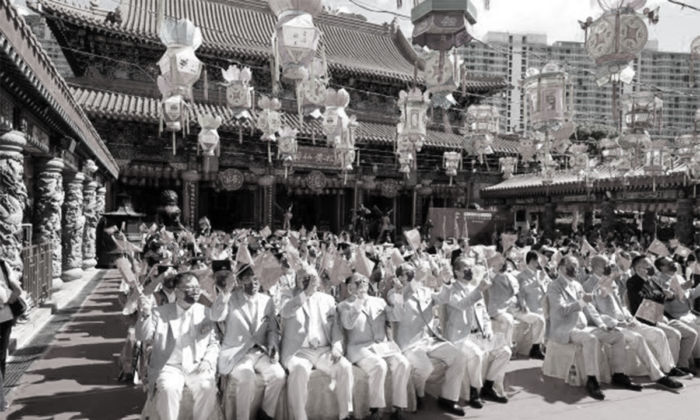 Wong Tai Sin Temple, the most popular Taoist temple and one of the famous tourist attractions in Hong Kong, built a flag-raising platform and became the first major religious venue in Hong Kong to hold the flag-raising ceremony. Scholars said that religions in Hong Kong having to follow the political ideology of the Chinese Communist Party (CCP), is only a matter of time.

Sik Sik Yuen, the management organization of Wong Tai Sin Temple, announced on its website on June 26, 2022, that they are the first religious place with a flag-raising platform in Hong Kong, and that the platform was completed because this year marks the 25th anniversary of the handover of Hong Kong’s sovereignty,

It is planned that the flag-raising ceremony will, in future, also be held on major days such as handover day July 1 and on National Day, October 1.

It is the first major religious place in Hong Kong to have a flag-raising platform and hold the flag-raising ceremony.

A scholar said that religions in Hong Kong having to follow the political ideology of the CCP, is only a matter of time.

The initial ceremony was held on June 26, with the Hong Kong Adventures Corps serving as the flag-raising team, and nearly 100 directors and members marching, led by the Sik Sik Yuen leader of Wong Tai Sin Temple.

The District Officer of Wong Tai Sin area and a representative of the CCP Hong Kong Liaison Office took lead in the opening ceremony, while the Commissioner of Police, Raymond Siu Chak-yee, delivered a video speech.

It was one of the busiest places of worship because of the support and respect of the people for Wong Tai Sin, who cured diseases and saved lives, and his virtues were known to many families.

But in Mainland China, it is a fact that religion must follow the political ideology of CCP.

On February 9, 2021, the CCP State Administration of Religious Affairs of in mainland China announced the “Administrative Measures for Religious Clerics,” CCP is a rolling-out grid management and localization of religions to monitor religious clerics.

Among them, Articles 35-39 stipulate the training, education, appointment, assessment, reward and punishment of religious clerical personnel by religious groups, and the establishment of personnel profiles for the religious affairs department to monitor the words and acts of the clerics.

Article 15 covers regulations such as “Inheritance and Succession of Tulku in Tibetan Buddhism,” including the application for the reincarnation of Tulku, the process and method of searching, and the identification of the reincarnated youth of Tulku, to be approved by the CCP rubber stamp legislature.

According to reports, the reincarnation of the 11th Panchen Lama, Gedhun Cho Nyima, identified in 1995 by Dalai Lama, and his family ‘were forced to be disappeared.’

Then CCP chose the Panchen Lama identified by itself and tried to control Tibetan religion.

Subsequently, the CCP political ideology officials directly took over the management committees of monasteries in Tibetan areas, and controlled the application and search for the reincarnation of Tulku in various parts of the Tibetan area.

After the implementation of the Hong Kong National Security Law on July 1, 2020, when pro-democracy groups and camps were forced to disband one by one or unwillingly disbanded, an unnamed scholar once predicted to the Epoch Times, “the next step of the national security is definitely the control of ‘religions’ in Hong Kong.”

As for the flag-raising ceremony of Wong Tai Sin Temple, he was not surprised, but felt that it came so quickly. He also said that “religions following the political ideology of CCP is just a matter of time.”

The reporter had interviewed several Taoist groups, and found that there are many people who “are patriotic for the country and the party.”

While the Epoch Times mentioned to the scholar that religious groups such as Sik Sik Yuen already had some pro-CCP members. The scholar said, “some? You are too polite.”

He also pointed out, “before the Election Committee was reformed, there were already too many people from the Hong Kong Taoist Association on the electoral committee, and there are more now.”