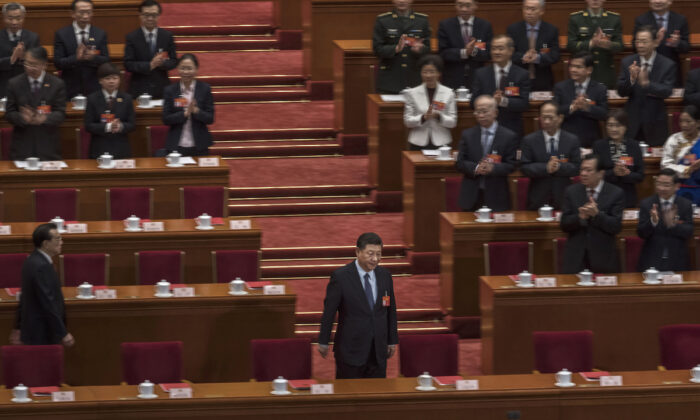 The administration of Chinese leader Xi Jinping issued a rare warning against his rivals at a recent national police meeting, a move that an expert says indicates that the communist regime faces an unprecedented internal crisis since the downfall of a Chinese vice minister of public security.

On Jan. 24, Xi’s close ally and party chief of the Ministry of Public Security Wang Xiaohong announced at a conference the formation of a leadership panel dedicated to “eradicate the baneful influence of the political clique led by Sun Lijun,” the former deputy head of the ministry.

The process of investigation into Sun’s illegal activities spanned 17 months. Beijing dismissed Sun from his post on April 19, 2020, but it took until Sept. 30, 2021, for Chinese authorities to officially accuse him of suspected serious violations of Party disciplinary rules and laws in a strongly-worded notice.

This action is one of several high-profile moves by Chinese leader Xi in recent times aimed at punishing and deterring his opponents, analysts say. They note that Sun’s downfall has unusually been prominently publicized, suggesting heightened factional fighting behind the scenes within the Communist Party.

“Seventeen months must be a record length of time for Beijing to probe a vice-ministerial official,” said Tang. “Meanwhile, the official notice announcing his fall included more than 700 words, the longest of its kind.”

According to the expert, Sun’s case is by no means an isolated incident, which necessarily involves far more complicated, higher-level power struggles among political factions. As to the Chinese Communist Party (CCP) describing Sun’s loyalists as a “political clique,” Tang said, the label is as serious as the designation of “counter-revolutionary group” used during the Cultural Revolution, the harshest accusation within the CCP system in the 1960s and 70s.

Moreover, it was an extremely rare move for Xi to televise the confessions of disloyal officials as members of a political group, Tang said, noting that this was probably the first time this has occurred since the “Gang of Four” incident in 1976.

The four-member group consisted of the most powerful figures during the 10-year Cultural Revolution, a political upheaval orchestrated by then-Chinese leader Mao Zedong. After Mao’s death in 1976, they were arrested, tried publicly, and sentenced to up to life imprisonment.

According to Tang, the internal struggles within the CCP have reached new heights, suggesting that conflicts will only grow more intense in the lead up to the 20th National Party Congress late this year where Xi is set to launch an unprecedented bid for a third term as leader.