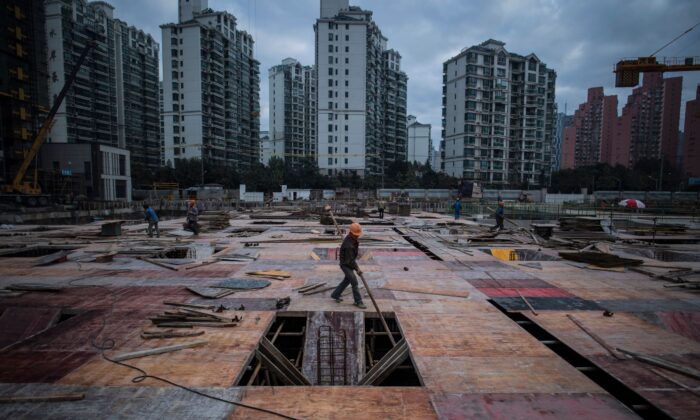 A man works at a construction site of a residential skyscraper in Shanghai on Nov. 29, 2016. (Johanness Eisele/AFP via Getty Images)
Thinking About China

The new year is less than a month old, and economic challenges are already piling up for Beijing.

It’s a pivotal year for the Chinese Communist Party (CCP), which is expected to announce a new slate of leadership (besides Xi Jinping) later this year. How well (or poorly) the Party handles the country’s economy and health will be critical going forward.

And easing isn’t what Beijing wants, even if it has loosened the reins slightly this month. After famously putting limits last year on how much developers can borrow in an effort to deleverage the industry, the CCP is unlikely to open the flood gates.

The catch-22 for the CCP is that if left unsolved, an illiquid real estate market will cause broader issues, especially at local and municipal governments.

We’re not talking about governments of coastal tier 1 cities such as Shanghai or Hangzhou, but smaller cities and municipalities in the interior and the northeast of China. In many cities, sales of land to property developers serve as a critical revenue source, as much as one-third of all fiscal revenues.

This would create a funding crunch for municipalities, which uses the proceeds from land sales for public works and infrastructure projects to provide both jobs and future revenue streams. So if developers halt new real estate projects, the local governments could quickly see their projects also halted. Many of those projects have their own debt attached. We could very well see a local government default crisis as a next leg following the real estate crisis.

China’s COVID-19 policy also presents a challenge. The country’s long-standing “zero-COVID” policy has meant draconian lockdowns in exchange for suppressing the virus. And in the face of the highly contagious Omicron variant, authorities have shown little willingness to ease the policy.

The CCP has locked down three cities since December, including Xi’an, Anyang, and Yuzhou, for weeks. More recently, the coastal city of Tianjin began testing all residents to stamp out COVID.

Economically, China’s lockdowns are pretty destructive not just for China but abroad as well. Business activities halt, transportation stops, and factories are shut down. China, as the world’s manufacturing hub, could worsen the ongoing supply chain crisis if the lockdowns become widespread.

Economists are closely watching how the CCP responds to the Omicron variant over the next several weeks.

Chinese New Year begins early this year, on Feb. 1, and the 2022 Winter Olympics in Beijing begin on Feb. 4 and will last for three weeks. These two major events will drive a significant movement of people and goods. COVID outbreaks during these activities could send the country under lockdown and cause issues for Beijing.

These are a few of the more immediate troubles facing the CCP in January. And this doesn’t include more macro issues such as the U.S. Federal Reserve’s expected interest rate rises later this year, which could hurt foreign investments into China, or higher global inflation hurting demand for Chinese products.

These challenges coupled with a pivotal political year for the CCP—leadership reshuffle, Taiwan dilemma, and global pushback of Beijing’s agenda—will guarantee an eventful year for the Chinese economy.