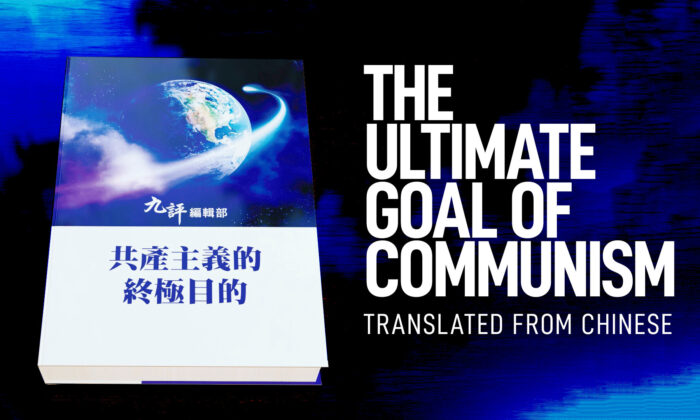 Cover of the book "The Ultimate Goal of Communism." (The Epoch Times)
Thinking About China

CCP Exposes Its Fascist Nature Through the Chained Woman Case

For more than 20 years, she was chained, beaten, and gang raped. Her teeth were pulled out with pliers and the tip of her tongue was cut off. She was treated as a birthing tool and bore eight children. She likely suffered more than what we know, but the regime will not tolerate the revelation of any more details. However, what we do know is enough to suffocate any conscientious mind.

The outraged public forced the Xuzhou city government to respond. But, several official statements were ill-logical and conflicting, their only purpose was to stop more truth from being told. Reluctantly, a provincial level investigation team was dispatched. But the first task of the team wasn’t to find the facts about the perpetrators of the crimes, it was to find out who leaked the photo of the marriage certificate that clearly showed the chained woman was not the woman on the certificate.

Two young ladies wanted to visit the chained woman in Xuzhou, but the police kidnapped them like the mafia would do, and charged them with the crime of “picking quarrels and provoking trouble”—a typical allegation towards any Chinese who tries to exercise their right to find the truth.

Among the demands for truth, we didn’t hear comments from any Chinese public welfare organizations. All we heard was more more details about the police going after truth seekers.

Subsequently, there was a large-scale deletion of internet posts, deletion of online accounts, subpoenas, telephone warnings and threats, some universities and units receiving verbal notices of “no discussion,” and so on—typical shady tactics used by the Chinese Communist Party (CCP).

The 1989 publication titled, “Ancient Sins—Documentary of Women Trafficking in China,” which detailed the kidnapping of 48,100 women in just the six counties of Xuzhou, in the three years from 1986 to 1989, was removed from bookshelves.

The CCP’s state media, on the other hand, was overwhelmingly silent.

Dongji Village, where the chained woman was found, is now surrounded by iron walls, and all roads are strictly guarded. No one is permitted to enter the area, even if you are well prepared with documents necessary for travel during the pandemic, such as a negative nucleic acid test.

This fascist act by the CCP is blocking people from pursuing the truth and exposing the inhumanity, something that matters a great deal to hundreds of millions of Chinese people.

None of the entire CCP machinery spoke up for the victim—not the bureaucratic agencies, not the media, not the grassroots governments, not the social elites.

The crime of human trafficking has been rampant under CCP rule because the CCP has never cracked down on the criminals, even though reports of missing people have been constantly heard, and even footage of criminals conducting kidnaps in broad daylight posted online.

For such crimes to exist the CCP’s permission or endorsement would be required in China today. When the crimes of human trafficking have clearly formed and operated as a large national network, shouldn’t we ask how this happened?

When the regime started a campaign to crack down on underworld forces in 2018, it claimed the key emphasis of the was targeting the crime protection umbrellas. The size and ubiquity of human trafficking in China clearly shows the existence of a large umbrella, which the special campaign hasn’t targeted. Why?

At a superficial level, it is because the victims are civilians who pose no threat to the regime’s power or its vested interest group. But, public opinion about the chained woman has a different take this time. Local authorities’ statements only drew much wider criticism and cries for truth.

The cover-up of the chained woman incident exposes the CCP’s fascist face and cannibalistic evil nature. People need to wake up and see that even clamoring and winning glory for today’s China is deceiving innocent people both domestically and internationally, and whitewashing the evil conduct of the CCP.

The demise of the CCP is no longer wishful thinking.

In June 2002, deep into the Zhangbu River Valley of Pingtang County, Guizhou Province, a local Party cadre found a naturally formed boulder, inscribed with six Chinese characters that said “Death to the Chinese Communist Party,” inside the local National Geology Park. Chinese experts confirmed that it was a rock formed more than 270 million years ago, and verified that the boulder fell from the cliff on the left bank of the river valley about 500 years ago.

Just as I was ready to conclude this article, the local provincial investigation report was made available. As expected, we didn’t hear a word from the chained woman, whose true identity remains a mystery; all else was as stated in previous official reports, except for the so-called punishment of 17 relevant staff, in residence registration, marriage certification, and family planning, for negligent oversight.

If anyone accepts this token treatment of the chained woman incident, I would encourage people to read The Epoch Times editorials entitled “Nine Commentaries on the Communist Party” and “The Ultimate Goal of Communism.”

These publications will help remove the toxic ideology instilled by the CCP from people’s minds, will prevent the innocent souls from being deceived by the specter, and gain the blessing of God.

Xiang Yun
Follow
Xiang Yun is a freelance writer who has contributed to the Chinese edition of The Epoch Times since 2020.