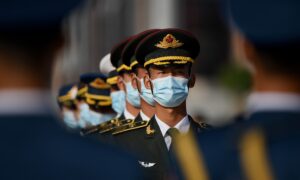 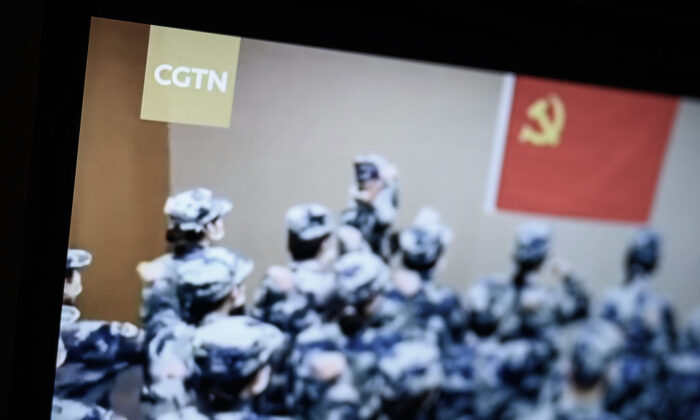 Scenes from a program from the CGTN archive are displayed on a computer monitor in London, England, on Feb. 04, 2021. Ofcom say that Star China Media Limited (SCML) who owns the licence for China Global Television Network (CGTN) doesn't have day-to-day editorial control over the channel, which is against its rules. (Leon Neal/Getty Images)
Chinese Regime

“Telling the China story well” to the world has been a main task for the CCP’s propaganda ministry since Xi Jinping declared it a national priority at the 18th National Congress of the Chinese Communist Party (CCP). The ruling regime said that it is constantly trialing “new concepts, new scopes, and new narratives” to influence global opinion, and that foreign faces and the voices of so-called “internet celebrities” have provided some utility as part of the CCP’s latest public relations weapons.

The CCP, as early as 1944, employed foreign faces to do the work of its propaganda ministry, having British national Michael Lindsay become one of the “founders” of the English-language broadcasting department of the CCP’s Xinhua News Agency in Yan’an—the CCP’s base before it took power, which is considered its “Revolutionary Holy Land” after it beat the Kuomintang and established the People’s Republic of China.

On June 19, Xinhua remembered Lindsay in an article titled “Foreign friends reflect on CPC’s success over the past century.” It quoted his son, Jim Lindsay, as saying, “China plays an important role in world affairs. Other big countries must cooperate with China to solve global problems such as climate change, biodiversity conservation, and pandemics.”

Following in Michael Lindsay’s footsteps, more British nationals have either knowingly or unknowingly joined in efforts that sing the praises of the CCP to the world. Many are presenting their viewpoints on YouTube, despite the fact that YouTube is blocked by the CCP in China as the regime has no control over the viewpoints that may be presented.

For example, Barrie Jones, an English teacher at China’s Gulin University of Aerospace Technology, runs a YouTube channel and website both called “Best China Info.” On the website’s “About Us” page, Barrie writes a message reading, “Is China safe? Yes! China is not your enemy!”

This message was posted on March 11, 2020, when China was being hit hard by the CCP virus, commonly known as the novel coronavirus, and when nearly the entire country was still under the regime’s strict lockdown. It was also the day the World Health Organization finally recognised the spread of the CCP virus around the world as a pandemic.

In a video titled, “How China ISN’T crushing Uyghurs in Xinjiang,” Jones defended the CCP and said there is no proof that over 1 million people in Xinjiang have been put into camps.

He also said that Western countries attack the CCP on the Xinjiang issue because they cannot control Xinjiang, a stronghold of the CCP’s “Belt and Road Initiative.”

Jones claimed in a video in February that he “worked for a newspaper in England … Britain’s largest daily circulation newspaper for six years.” But the BBC has since contested the claim, saying that it found no evidence to support his claim.

Despite this, Jones has been given the authoritative title “former British journalist” by some of the CCP’s media publications. His video was even played during a daily briefing to the CCP’s foreign ministry as evidence to refute the BBC’s report about Xinjiang’s human rights abuses, and to support the claim by CCP mouthpiece CGTN (China Global Television Network) that the “BBC is not trusted even in the UK.”

In addition to his own videos, Jones has also posted videos from CGTN to his channel, such as his interview with CGTN’s host Liu Xin, who debated FOX Business’ host Trish Regan about trade and intellectual property in May 2019, at the peak of the trade war between the United States and China.

Another foreigner that China’s state media is calling a British “YouTube influencer” is Shaun Gibson, who traveled to China in 2017 to study. He is a contracted singer with Beijing Yi Qing Music & Culture Co. and is currently involved in CGTN’s Music Voyage video series, which seeks to promote the participation of foreign musicians, especially active vlog musicians, into the party-approved popular culture.

In addition, Gibson participated in a CGTN “Media Challengers campaign” and recorded its theme song.

Before British newspaper The Times published its report titled “China state TV channel CGTN enlists UK student influencers” on June 16, it contacted Gibson for comment, suggesting that Gibson was involved in a major Communist Party outreach effort. Gibson posted a video on his Chinese social media Weibo account as well as his YouTube account, saying that he just likes music and Chinese culture. He also talked about how he had responded to The Times.

Although his video on Weibo only received about 3,800 views and 125 likes, and about 530 views on YouTube in one month, CGTN has been promoting a program called “Why Does the British Media Target the Media Warriors?” It included Gibson’s video in that program as “evidence” to refute the report by The Times.

While it is possible that Gibson’s participation in the Chinese media projects came out of his appreciation of Chinese culture and music, the videos are unfortunately not just about that.

For example, the video “Song of Maonan,” which he uploaded to Weibo and the Chinese video sharing site Bilibili, praises the CCP’s achievement of “poverty lifting” in the Maonan region in Guangxi province, China.

“Poverty lifting” has always been claimed by the CCP as one of its main political achievements after it dragged the majority of the Chinese population into poverty through its endless revolutionary campaigns.

When the song was officially launched on March 27, the CCP’s key global mouthpiece, China Daily, published a special report announcing in a very excited tone: “The overseas promotion documentary ‘Song of Maonan’ airs today on CGTN. See you there, rain or shine!”

China Daily said that the program was “an experiential foreign promotion documentary” that “speaks through the mouth [of a foreigner]” and “uses the role of ‘a foreign new media blogger in China’ to spread at home and abroad the message of the new era of China in the eyes of a foreigner.”

The CCP has also enlisted members of the Communist Party of the U.S.  to appear in their international propaganda efforts.

For example, the program “A Date with China” organized by the China Daily, which invited foreign internet personalities and vloggers to create content to “tell the story of China well,” had Ian Goodrum, a member of the Communist Party of the U.S., talk about how people in Xinjiang are “taking their destiny in their own hands.” Goodrum also echoed the party line, claiming that reports of genocide in Xinjiang are “nonsense.”

Who Pays the Bills?

Another content creator, British YouTuber Oli Barrett, revealed in a video that organizations such as China Radio International had paid for his airfare, lodging, and meals in exchange for using his videos in their commentary, adding that it wasn’t a formal contractual relationship.

The CCP is trialing a model of providing food, accommodation, and transport in the hopes that some vloggers will create content that meets the requirements of the party.

On June 25, the International Federation of Journalists (IFJ) released a report “The China Story: Reshaping the World’s Media.” It said that one of the ways the CCP is able to influence foreign journalists is by inviting them to travel in China.

Similar propaganda videos are also being produced by local CCP governments. For example,  the Shanghai Municipal Government Press Office and the Xinmin Evening News interviewed 100 foreigners living in Shanghai and filmed the video series “Shanghai Through Our Eyes” as a tribute to the 100th anniversary of the CCP.

Also as a tribute to the CCP, the International Department of Xinhua News Agency invited foreigners to participate in the documentary “My Friend is a Party Member” to praise the CCP through the mouths of foreigners.

Associate Professor Wu Changchang from the School of Communication of East China Normal University said that such videos make Chinese viewers feel that “Chinese culture” is increasingly being accepted and recognized by ordinary foreigners. This psychology creates a cascading effect that strengthens the patriotism and nationalism of Chinese, Wu noted, adding that the video platform “thus rapidly promotes the development of the whole industry.”

Professor You Jie of China Media University said that the biggest advantage of having foreigners tell China’s story is “there is no language or facial barrier” for foreigners. Just as the Chinese are more receptive to the Western world as described by Chinese, foreigners telling China’s stories is also more readily received by foreign audiences, as the audience will not feel that it is just some Chinese people trying to sing praises of China.