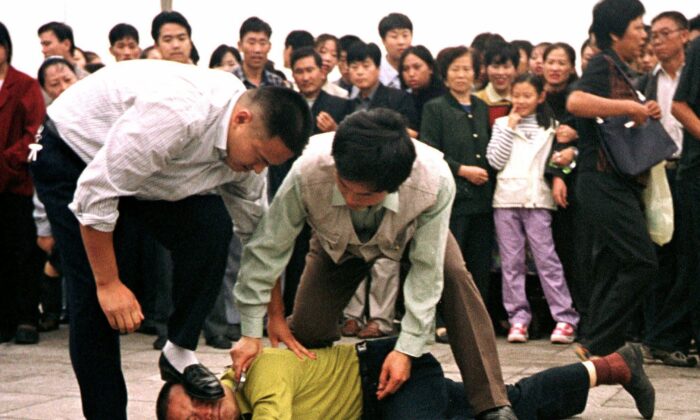 While the brutality in the campaign to persecute Falun Gong has been gradually exposed to the outside world over many years of victim testimonies, a recent report revealed that the regime has developed a “kit” for “trained personnel” to specifically use on Falun Gong adherents.

Jiang Yongqin, a female practitioner, has been imprisoned multiple times by the regime since 2009 for her belief in Falun Gong, a cultivation practice based in ancient Chinese culture. The Communist regime, under Jiang Zemin, started persecuting Falun Gong in 1999. Over the years, the campaign has caused numerous imprisonments and deaths, and resulted in systematic organ harvesting from imprisoned followers.

Minghui.org, a U.S.-based website that documents the Chinese Communist Party’s (CCP) persecution of Falun Gong, provided the details of what Jiang Yongqin recently went through.

According to the report, Jiang Yongqin’s latest abduction took place on June 12.

An insider revealed that she was transferred to a secret location sometime between July 7 and 8 for interrogation. The “trained expert” and his assistant applied the torture kit to sexually abuse her until she totally collapsed.

The expert told Jiang that they will leave the kit at the interrogation site just for her until she gives them the information they want.

He said, “There are certain restrictions on using the kit; but, when it comes to Falun Gong, we use it whenever we like.”

Jiang was a teacher at the Experimental Teaching Center for Mechanical Basis at Zhejiang Sci-Tech University when she was first abducted by the police on Sept. 26, 2009. In Feb. 2010, she was sentenced to three years in prison and sent to the Zhejiang Women’s Prison, leaving her then 4-year old daughter and elderly and sickly in-laws with no one to care for them.

Since the persecution started in 1999, the police have frequently harassed Jiang and her family and interrupted her employment.

On June 12, local police abducted her and her family, including her 8-year old daughter, from their current residence in Jilin. The police also ransacked her home and confiscated her computer and cell phone.

The family members were later released, but Jiang remained in detention at an unknown location.

An insider told the Minghui.org correspondent in Jilin that the Ministry of Public Security was involved in this abduction for unknown reasons.

For the first time, the secret agency was named: Special Disciplinary Office (SDO) under the Jilin provincial public security department.

According to the insider, the “kit expert” and his assistant were both from the SDO. Along with two other Jilin national security policemen surnamed Tang and Lu, the four men started to work on Jiang.

Inside the kit were toothpicks, small instruments, drugs, wires, aphrodisiacs, and other items.

According to the insider, the four men first sprayed mustard oil into Jiang’s nostrils, added lit cigarettes, and then left the cigarette butts inside her nostrils. Jiang later coughed the butts out through her mouth.

Seeing that Jiang would not give them the information they wanted, the expert instructed other men to sexually assault her using items from the kit. When they found that she was menstruating, the expert claimed that the items would work even better.

The whole process took nearly two hours until she collapsed and gave in. She gave them the passcode of her computer.

‘A Systematic Protocol for Persecution:’ Analyst

China analyst Heng He said that torture interrogations are common inside Chinese prisons; however, they are usually conducted by the prison staff or other prisoners.

This case stands out for the fact that the so-called expert was dispatched from a higher level and used a kit with protocols that contained drugs for interrogation.

He said, “This type of sexual persecution is far different from the past.”

Heng explained that torture interrogation has been a systemic tool under the ruling Chinese Communist Party (CCP). For example, the iron chair and electric batons are known as CCP tools of torture in the international community.

The application of drugs and sexual assault in the CCP’s arsenal are all too common, said Heng.

He explained that CCP has always engaged in exploring methods of torture that are rare in other countries. He believes the so-called expert is actually someone specialized in finding ways to torture a detainee to the extreme, without killing them, in order to get the information the authorities desire.

Regarding the unrestricted use of the kit on Falun Gong practitioners, Heng said similar claims have been widely reported since the regime initiated the persecution in 1999.

He said that the CCP’s judicial system has treated Falun Gong practitioners as exceptional cases; that is, all regulations may be invalid if a case is related to Falun Gong.

“Because it has been a campaign of political persecution from the very beginning, it’s bound by no law.”

Heng used the 610 office as an example. It is an “extra-legal” body set up in June 1999 to specifically target adherents of Falun Gong.

“This is enough to prove that in the process of persecuting Falun Gong, the CCP speaks of no laws,” Heng said.

Haizhong Ning and Yi Ru contributed to this report.