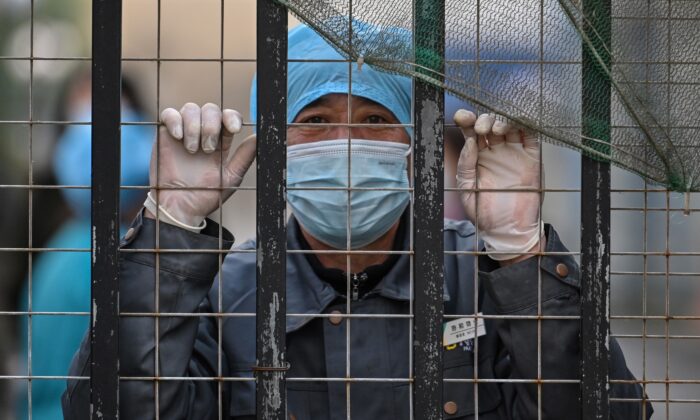 A worker wearing a face mask looks out from an entrance of a hospital toward the Wuhan centre for disease control and prevention in Wuhan, China's central Hubei province on Feb. 1, 2021. (Hector Retamal/AFP via Getty Images)
INSIDE CHINA

The CCP (Chinese Communist Party) virus outbreak that originated in Wuhan, China, is causing a substantial loss of life to China’s neighboring country, India. At the same time, the CCP’s sudden establishment of a new agency called the National Bureau of Disease Control and Prevention is attracting international attention.

On that same day, Zhong Nanshan, the leader of a group of experts connected to the NHC, told Chinese state media that the pandemic exposed the CCP health system to shortcomings—inefficiency and delayed reactions—that likely stalled the handling of virus conditions, and that the new agency would strengthen the nationwide deployment of disease control and early warning measures.

In an interview with China Business Network on Feb. 23 last year, former Deputy Director of the China Center for Disease Control and Prevention (CCDC), Yang Gonghuan, blamed the CCDC’s failure to effectively respond to public health emergencies on its unclear roles and responsibilities, and a talent shortage.

A Practice of Whitewashing

U.S.-based political commentator for The Epoch Times, Alexander Liao, sees Yang’s statement as a whitewashing of Chinese leader Xi Jinping’s coverup of the virus and attributes the resulting global outbreak to the deficiencies of the former CCP system.

When the director-general of the World Health Organization (WHO), Tedros Adhanom Ghebreyesus, visited Beijing on Jan. 28, 2020, Xi told the WHO chief that he was instructing and deploying containment measures in person.

“The CCP and its head chief, having been chastised by a number of nations, governments, organizations, and individuals for the global spread of the CCP virus, just blamed the deficiencies on an agency to avoid culpability,” Liao said.

The Tactic of Concealment

Liao said that concealing the truth is a common practice of the regime. “The establishment of the new agency will not change its evil nature,” he said.

This tactic has been frequently utilized to cope with public health incidents such as SARS, the CCP virus, and others.

In November 2002, the Chinese authorities’ concealment of the SARS outbreak, which originated in Guangdong, resulted in the virus ravaging Southeast Asia and the globe.

The CCP eventually bowed to international pressure and spent $113 million on building a web-based infectious disease reporting system after the SARS outbreak. According to a report (pdf) by China Information System for Disease Control and Prevention, the system has the “ability to detect, analyze, prevent, and respond to any communicable disease outbreak in the country.” Accordingly, it serves the entire Chinese population and reports findings to an expanded CCDC.

In March 2019, CCDC Director Gao Fu spoke to the media during the National Committee’s annual session and promised that China would never again suffer from another SARS-like epidemic. “China can ward off the virus because of the well-established web-based infectious disease surveillance system,” he said.

Nonetheless, a half year later, a larger-scale catastrophe took place.

In December 2019, the CCP virus epidemic broke out in Wuhan, Hubei Province, and Wuhan soon became the hardest-hit area. Amid this pandemic, the web-based system did not help to ward off the virus because the CCP handled the outbreak by using its common practice of concealment.

On Feb. 11, 2020, the Chinese Preventive Medicine Association published an article on the Chinese Journal of Epidemiology’s website stating that the novel coronavirus had started “human-to-human transmission among those who have close contact” since mid-December 2019. Yet, the Wuhan Municipal Health Commission had announced on Dec. 31, 2019, that no cases of human-to-human transmission and infection in medical staff had been confirmed.

By Jan. 23, 2020, Wuhan was locked down and the CCP virus soon spread throughout the world.

The CCP virus has been plaguing China and the world for more than a year. As of May 5, 2021, Chinese authorities officially reported 103,713 confirmed cases with 4,858 deaths. However, this official tally is highly doubtful.

For example, on March 26, 2020, Chinese online media Caixin published a report stating that the real death toll in Wuhan was far higher than the official tally of 2,535 as reported by Xinhua News, a regime mouthpiece.

According to Caixin’s report, people stood in an extremely long line at a Wuhan funeral home to claim ashes of deceased family members who had died amid the pandemic.

A worker had said that not only was there a long line, but the funeral home was short-staffed, so families had to wait five to six hours to collect the ashes.

A truck driver who delivered urns to funeral homes had dropped off about 2,500 urns that day. He also had already delivered a full truckload of urns the day before. More than a dozen male workers helped to unload the urns and there were already seven stacks of urns, with each stack containing 500 urns each.

Based on this report, the death toll in Wuhan alone seems to outnumber the official national tally.