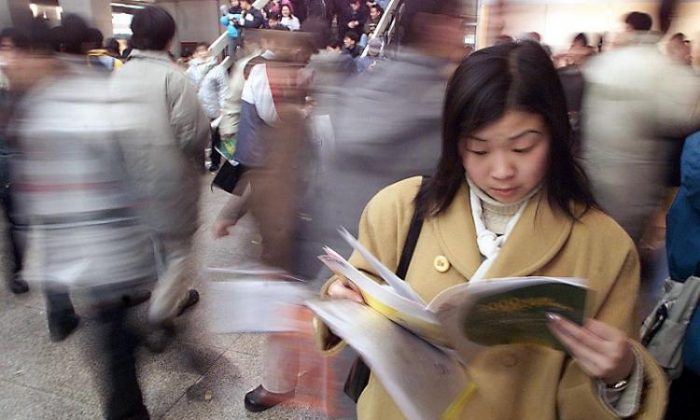 The employment rate of college students published by the China Ministry of Education is being disputed. Many college students have posted their opinions on a blog to expose the data as fake. (Stephen Shaver/AFP/Getty Images)
Thinking About China

China is faced with an extremely grim job market in 2022, as at least 10 million workers have lost their jobs after the regime’s series of economic policies led to the default of the real estate sector, diminished the after school tutoring industry, and suppressed e-commerce giants. Add to this the more than 10 million college graduates expected this summer, and a record high in both total number and volume of jobless is foreshadowed.

But the regime always has a way to whitewash even such a devastating situation.

On Feb. 9, state mouthpiece People’s Daily Online touted the trend of “flexible employment,” that is, temp jobs, that 200 million people, including more than 16 percent of graduates from higher education in both 2020 and 2021, use to  “actively conduct flexible employment;” and “more than 1.6 million of them pursue self-media and relevant businesses.”

When the “six stability policy” was proposed in July 2018 for the first time, stabilizing employment was prioritized as the regime’s number one policy.

The crisis of massive unemployment after years of struggle was again on the agenda of Chinese premier Li Keqiang’s State Council meeting on Jan. 19. He proposed governmental work efforts to focus on policy support for more jobs, and to readjust its macroeconomic policies.

In the regime’s history, an unstable job market has been a problem that was clearly due to the incompetence of the Party. Prior to Xi Jinping coming to power, the regime created four waves of unemployment in China.

The first employment crisis occurred from the 1950s to the 1970s.

The political movement of Mao Zedong sent 16 million urban youths to the countryside to learn from the villagers, a rare massive migration to the rural areas and a first in China’s history. Millions of young adults lost their education, their youth, and their job opportunities.

The second employment crisis happened in 1978 when China adopted reform and opening-up, and the consequent influx of tens of millions of jobless young adults returning from the rural areas needed jobs.

The third wave of massive unemployment happened from the mid-1990s to the early 2000s, when the reform of state-owned enterprises took place, and the 1997 Asian financial crisis occurred. More than 60 million Chinese lost their jobs.

The fourth was the 2008 financial crisis, that hit China’s economy hard, and caused 20 million migrant workers to lose their jobs and return to their hometowns.

The unemployment problem became the regime’s macro control target for the first time in its 2002 rubber-stamp legislature meeting. The regime mentioned it again in the 2006 national meeting and declared employment as one of the nine goals and missions set for building a socialist China in 2020.

The problem of unemployment was hidden when China experienced high economic growth between 2002 and 2012 and Hu Jintao was the leader.

The chronically ill Chinese economy finally became visible and the true crisis could no longer be hidden after Xi came to power near the end of 2012. China’s GDP growth rate dropped below 8 and continued to plunge every year.

The regime’s international status was completely reversed after Trump took office in 2017 because of the 2018 U.S.-China trade war, the 2019 anti-extradition bill movement of Hong Kong, and the 2020 pandemic. China is experiencing an unprecedented severe employment crisis while its economy is taking a hit. The wave of large numbers of unemployed has emerged for the fifth time since the Party claimed its illegitimate rule in China. Unemployment is also the reason why the “six stability policy” was proposed.

Unlike the previous waves of unemployment, the regime has no way to resolve this pressing crisis.

During the first wave of millions of jobless people, Mao was at the height of his man-slaughtering power. The wave of unemployment was suppressed in a deadly way. There’s no one in China today who enjoys the power and atmosphere that Mao had both inside and outside China to enact similar suppression of the current employment crisis.

During the second wave of unemployment, the Chinese market gained momentum from the reform and opening up as people engaged in developing businesses and the unemployment crisis disappeared. Today, the momentum is gone, the entire country is turning left, and the economy is diving.

The third wave of unemployment was only temporary because China joined the WTO in 2001. Active foreign trade brought in huge foreign capital, stimulated massive numbers of private enterprises, and rapid economic growth.

Today, the regime has adopted strict supervisory measures and suppressed private enterprise. Foreign businesses are withdrawing, and the global industrial chain is being restructured. The incompetent regime can no longer deceive the world.

During the fourth wave of masses of people out of work, the CCP launched a two-year (2008-2009) economic stimulus plan and alloted 4 trillion yuan ($630 billion) for infrastructure such as railways, highways, and airports. The GDP grew 8.9 percent in the third quarter of 2009.

People ask if China could pull off another economic stimulus plan to resolve the crisis. I believe it would not be effective.

For instance, according to a recent research article by Zhang Xiaojing, director of the Institute of Finance of the Chinese Academy of Social Sciences, China’s current debt-to-GDP ratio exceeds 270 percent, which is significantly higher than that of emerging economies.

The brief comparison shows that no large scale infrastructure investment will effectively resolve such an enormous debt burden and risk that China is currently experiencing.

The employment problem matters to hundreds of millions of families and their livelihood, especially when the regime is most concerned about the stability of its rule. Obviously, the regime is at its end game.

Wang He
Follow
Wang He has master’s degrees in law and history, and has studied the international communist movement. He was a university lecturer and an executive of a large private firm in China. Wang now lives in North America and has published commentaries on China’s current affairs and politics since 2017.