CCP Bans Listing COVID-19 as Cause of Death: Doctors 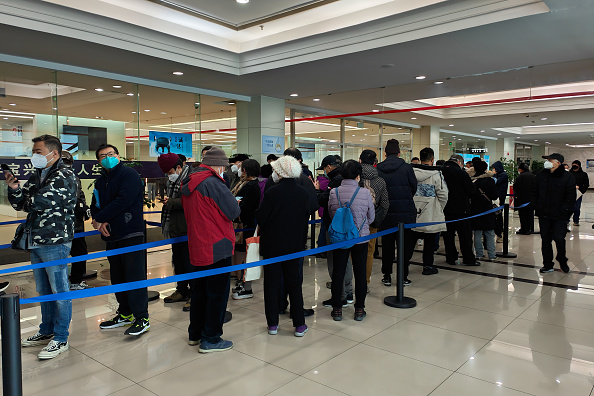 Family members of the deceased line up for the cremation procedures at a funeral home in Shanghai, China, on Jan. 4, 2023. (Wang Gang/ Feature China/Future Publishing via Getty Images)
By Kane Zhang

Several Chinese doctors revealed that authorities withheld information and changed the definition of a COVID-19 death. The doctors also stated that hospitals have been forbidden to declare COVID-19 as the cause of death on death certificates.

“The government has now stipulated that patients who die because of exacerbation of underlying diseases due to COVID-19 cannot be counted as COVID-19 deaths. That is the standard,” Liu Chen (a pseudonym), a doctor at a hospital in Dalian City, Liaoning province, told The Epoch Times on Jan. 17.

“That’s why no one knows the mortality rate of COVID-19 from top to bottom. Even the CCP authorities have no accurate figures in this regard.”

“My friend’s father was hospitalized in Yantai hospital. [He was] originally intended to be discharged next week. Suddenly [the restrictions] were lifted, and he got COVID-19 and died a few days later,” Gu Cheng (a pseudonym), a resident of Yantai City, Shandong Province, told The Epoch Times on Jan. 17.

“The doctor was not allowed to write COVID-19 as the death cause, so they wrote his death cause as the original cause of his hospitalization, which was heart disease. Other hospitals also do not allow writing COVID-19 as a death cause.”

The Chinese Communist Party (CCP) announced on Jan. 14 that around 60,000 deaths attributed to the CCP virus have been reported by hospitals in the past month.

“The official death toll is 60,000. This number is not true,” Gu said. “Crematoriums in all cities are so busy that bodies are piled up. It is not clear how many people have died and how many have died because of COVID-19.”

“The total number of deaths is also covered up by the CCP. The officials do not want the people to know how many people have died.”

Some Chinese citizens question the legitimacy of the death toll numbers—with nearly 1 million natural deaths per month on average, why have the additional 60,000 deaths overburdened the crematorium system and overwhelmed the available space for farewell ceremonies?

“We don’t know exactly how many people have died of COVID-19,” Cheng Ying (a pseudonym), a doctor at Yantai Mountain Hospital told The Epoch Times on Jan. 17. “The number of COVID-19 deaths was not counted as the government did not allow writing COVID-19 as the death cause.”

Wang Ling (a pseudonym), a doctor at another hospital in Yantai City, Shandong Province, said that the number of COVID-19 deaths has been so high that the provincial medical system has issued an emergency notice banning COVID-19 from being entered as the cause of death when issuing death certificates to patients who died of COVID-19.

“[They] require [doctors] to fill other diseases in it. As long as there are other basic diseases, you can write any disease, but you cannot write COVID-19,” Wang told The Epoch Times on Jan. 15. “Also, for every patient who dies of COVID-19, the cause of death must be given with the consent of the hospital. Doctors are forbidden to write the cause themselves.”

There are 15 funeral homes in Shanghai, 13 of which have cremation ovens. The Epoch Times called several funeral parlors in Shanghai on Jan. 17 for information.

A staff member at the Shanghai Baoxing Funeral Parlor said that the funeral parlor is located in the urban district and cannot burn bodies, which will pollute the environment, and that they can only send bodies to other funeral parlors the next day.

“We are very busy here. There are many bodies to be processed,” he said. “If [you] send the body now … The waiting time is about one to three months.” “It might be quicker to take [the body] directly to a funeral home where it can be cremated.”

A staff member at the Shanghai Baoshan Funeral House said they only receive the bodies of residents in the area.

“[You] can pull the body over first and see which day [it] can be cremated,” he said. “If it is outside the area, we can’t receive it. Call 96280 to the municipal [center]. They are uniformly deploying. [We] don’t know which crematorium it may be assigned to, so we can’t tell you the specific waiting time for cremation.”

A staff member at the Nanhui funeral parlor in Shanghai said that they have six cremators that are operating every day.

“[If you] send the body now, [you] need to wait at least a week. It will not be cremated until the third day of the Chinese New Year,” the staff told The Epoch Times.