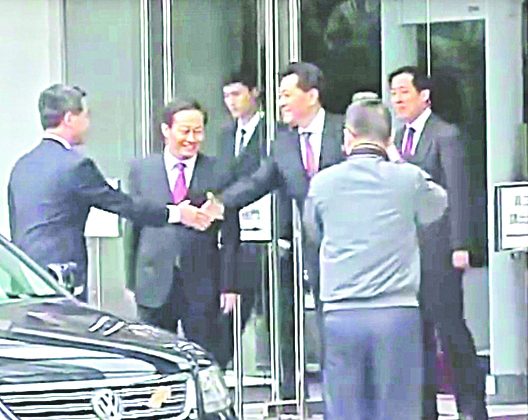 Li Gang, director of the Liaison Office in Macau, has suddenly been removed from the post and transferred back to Beijing as the deputy director of the State Council Overseas Chinese Affairs Office.

The State Department announced on July 19, a list of changes of more than 20 ministerial-level officials, including Li, Li was the first person to be replaced by the inspection team sent by the Central Commission for Discipline Inspection (CCDI), since starting its investigation in Hong Kong and Macau.

Li, 61, a Jiang faction official, served as deputy director of the Liaison Office in Hong Kong for nearly a decade and supported Leung Chun-ying in becoming the Hong Kong chief executive.

Some analysts believe Li’s demotion is a sign that the Jiang faction’s grip on Hong Kong and Macau is weakening, and this could be detrimental to the political careers of Leung and Zhang Xiaoming, director of the Liaison Office in Hong Kong.

Li was transferred to the Liaison Office in Macau in December 2012 as the deputy director. He was promoted to the position of director in January 2014.

Li’s transfer to the position of deputy director of the Overseas Chinese Affairs Office, barely two and a half years after he took charge of the Macau Liaison Office, is unusual. Although he retained his ministerial profile, many observers feel that Li’s move is a demotion.

The Overseas Chinese Affairs Office is a lightweight authority, whereas the Macau Liaison Office is an influential department.

When Li Gang was transferred to Macau, it was rumoured that he had been transferred to investigate corrupt mainland Chinese officials who were gambling in the local casinos or using them for money laundering. However, before showing any progress, Li received orders to pack up and return to Beijing.

Analysts believe that Wang’s former career in Fujian Province is a crucial factor in his redeployment to Hong Kong and Macau.

Wang worked in Fujian for 19 years. Among other positions, he was the director of the General Office of the Commission of Fujian Province and assistant to the mayor of Xiamen City.

Though Wang was not a direct subordinate of Xi when he was governor, political observers have attributed Wang’s Fujian background to the rise of his political career.

Xi’s ongoing anti-corruption campaign is aimed primarily at members of the Jiang faction. Some analysts believe that replacing Li was Xi’s first step in eliminating the Jiang faction officials in Hong Kong and Macau.

After the CCDI first sent a discipline inspection team to be stationed in the HKMAO at the beginning of this year, commentaries in Hong Kong media were already saying that the HKMAO and the Liaison Offices in Hong Kong and Macau were likely to see major changes, including changes to organisation, setup, and reporting structure.

Li Gang was absent from the CCP’s Two Sessions in March this year. This sparked speculation that he would be redeployed. Chen Sixi, the deputy director of the Liaison Office in Macau, told reporters then, that Li was on leave due to health reasons. After that, news of Li almost vanished.

For some time, Hong Kong and Macau have been considered the main avenues for CCP officials to launder their corruption money. Li Qiufang, who oversees the work of the CCDI’s discipline inspection team in the HKMAO, has told media that corruption in the region was under investigation.

Recently, several major corruption cases have been exposed in Macau. These include the arrest for corruption of Ho Chio Meng, the dark horse candidate for the first chief executive of Macau and former Prosecutor General of the Public Prosecutions Office; Macau tycoon Ng Lap Seng for bribing a former UN General Assembly president; and the imprisonment of Alan Ho, nephew of the casino tycoon Stanley Ho, for helping to facilitate a high-profile prostitution ring.

Li Gang has had a close relationship with Leung Chun-ying.ever since he was appointed deputy director of the Liaison Office in Hong Kong, he helped Leung to be elected, according to current affairs analyst Lai Chak-fun.

During the battle of the 2012 chief executive election, Leung’s votes were initially far behind Henry Tang’s, as members of the Liberal Party and Heung Yee Kuk were inclined to vote for Tang.

The Liaison Office tried to gain votes for Leung, and this included lobbying the electoral commission to switch their votes from Tang to Leung. Therefore, when Leung was elected chief executive in 2012, he went to the Liaison Office, the very next day, to express his thanks to then-director Peng Qinghua and Li Gang.

Many people and officials from the Jiang faction have recently been investigated, including former China Unicom chairman Chang Xiaobing, who face prosecution.

Lai said the HKMAO must have been involved in many corruption cases: Li Gang being demoted is only the first step.

After the CCP failed to get acceptance of the controversial anti-subversion law Article 23 in Hong Kong, in Sept 2003, Li Gang was transferred from the Central Propaganda Department to become the deputy director of the Liaison Office in Hong Kong.

The Central Coordination Group for Hong Kong and Macau Affairs was established in the same year, and it has gone through three leaders: Zeng Qinghong, Xi Jinping, and Zhang Dejiang. However, most analysts believe that the actual power lies in the first leader, Zeng.

Anti-corruption chief Wang Qishan restructured the CCDI in 2014 and then started to monitor Hong Kong and Macau activities for the first time.

Between April and May 2014, Song Lin, chairman of China Resources Group and Wang Shuaiting, General Manager of China Travel Service (HK) Group, were investigated. Song is said to be Zeng’s confidant.

First overseas ‘tiger’ falls: Gong Qinggai, former deputy director of the Taiwan Affairs Office, was the first “tiger,” or corrupt high-ranking official, to be taken down from a non-mainland office. It was also a signal that the CCDI was targeting mainland affairs offices in overseas territories.

CCDI moves into HKMAO: The CCDI team was stationed in the HKMAO for the first time. It was reported that the job scope of Li Qiufang, the leader of the team, covers the Liaison Offices in both Hong Kong and Macau.

CCDI leader appears, Li Gang disappears: Li Qiufang appeared for the first time in a meeting of the Political Consultative Conference Committee of Hong Kong and Macau. Meanwhile, Li Gang was absent from the Two Session meetings for several days, sparking rumours about him.

Zhang Yue caught selling one-way permits: Zhang Yue, a member of the Hebei Provincial Committee and Political and Legal Affairs Commission, investigated. Mainland media soon reported that Zhang, the “king of political and legal affairs,” had abused his authority and profited from selling one-way permits to Hong Kong for 1.5 to 2 million yuan each.

CCDI team in HKMAO: formally announced: The central government announced that the 10th round of anti-corruption inspections would include the HKMAO and its subordinate offices, including SAR Basic Law Committees, and others.