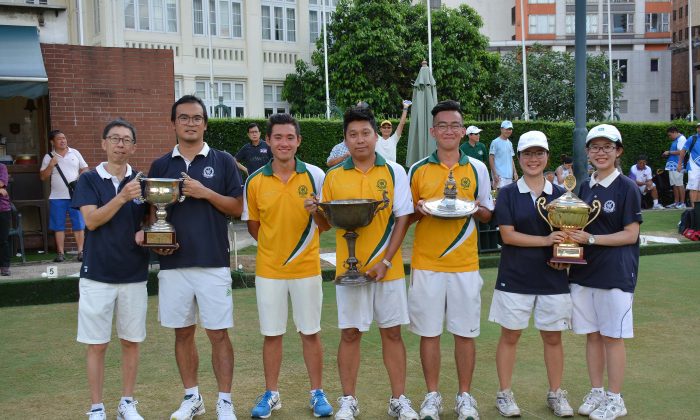 The three Craigengower Cricket Club teams showing with their trophies after lifting the National Pairs for the both mem and women as well as the National Fours. (Stephanie Worth)
HK Lawn Bowls

HONG KONG—Craigengower Cricket Club became the biggest winner of the first Finals Day of the year when their members won all three finals they engaged in.

The Finals Day, which was played at Kowloon Cricket Club last Sunday, July 9, grouped together eight finals to play in the morning and afternoon sessions.

CCC started the day with a challenge to the National Fours. The team was skipped by 2015 Bowler of the Year Jordi Lo and supported by Martin Shum, Imen Tang and Lui Chin Hong. They played against a Hong Kong Youth Team skipped by Anthony So.

The youngsters started well and opened up a lead of 9-1 after five ends but CCC stormed back with nine shots in the following three ends to move into the lead. The Youth team focused again and overtook the CCC team 15-12 after the 12th end.

However that was the closest they got to the trophy as they then lost 14 shots in the next five ends to hand the title to their opponent.

In the afternoon, the CCC duo of Robin Chok and Patrick Lo continued their push for another title for their club. They played against an Island Lawn Bowls Club team of Bronson Fung and Hong Kong international Li Ming Sum in the men’s Pairs final.

The game was a one-sided affair as CCC quickly took the lead and prevailed all the way through. The game finished at 21-11 after 17 ends.

The last hurdle for CCC to complete the hat-trick on the day was in the women’s Pairs.  The game was between CCC’s young blood of Andrea Chan and Angel So and the experienced bowlers Peggy Ma and Shirley Ko from Indian Recreation Club.

It looked all rosy for the CCC team as they were always on the upper hand. They lead 16-7 with four ends to go but then disaster struck. They suddenly lost the touch and lost 3-3-5 in the next three ends to enter the last end trailing the score with 16-18.

In the last end, Ma lost composure and was completely outdrawn by Chan.  Ko tried to cut the loss but missed with her last two shots. The two CCC girls scored three shots to lift their first ever premier title.

For Ko and Ma this was their second heartbreaking moment in the same day as they lost to a Shatin Sports Association team skipped by Eva Hui in the National Fours final in the morning.

The Mixed Pairs final also caught the eyes of spectators. In the match between two Hong Kong Football Club teams, the pair of Hong Kong international Dorothy Yu and CT Wong were surprisingly outplayed by clubmate Christina Yeung and Anthony Yip 28:2. The game, which was finished after 14 ends, was considered the highest winning margin ever in a national final.

That was also Yu and Wong’s second defeat of the day, both at the hands of their HKFC clubmates. They lost their Mixed Fours final in the morning.

National Indoor Singles will be played this coming Sunday July 15. Semi-finals will commence at 9:00 am with the finals scheduled to start at 11:00 am.