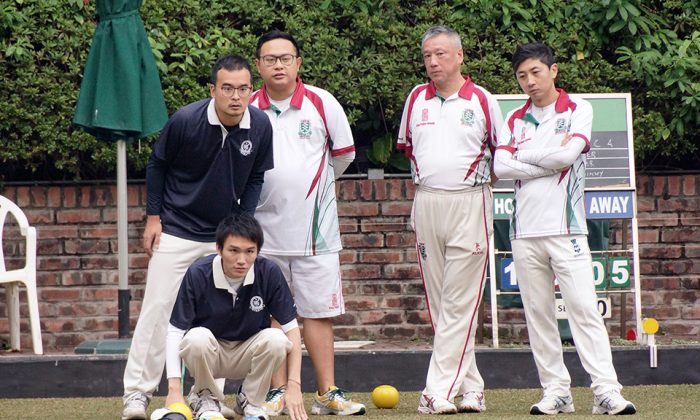 An impressive Craigengower Cricket Club team won their first ever Triples League Division 1 title with a game to spare.

CCC, whose best results since the competition was inaugurated in 2007 was a runners-up back in 2012, has been leading the table since the first day of the campaign. They won their first five game 8-0 and was never troubled by any teams in the division.

Before last weekend CCC was leading second-placed Kowloon Cricket Club by12 points so they just need five points to take the title. The team played at home against the defending champion Police team, who is in fourth position, last Saturday, Feb 20.

During the game only the team skipped by Stanley Lai lost 11:16 to Dave Hanson but the final result of 6-2 is enough to crown them.

The results made the 8-0 success of second-placed Kowloon Cricket Club meaningless as they have to settle for a runners-up trophy for the second year in a row. KCC last won the title in 2013.

Now the attention has moved to the relegation dogfight with six teams involved.

The most critical teams were rock bottom Lawn Bowls Training Center and the B team of CCC, who were eight and six points away from safety respectively.

LBTC will play Hong Kong Football Club away from home and if they took all eight points and 27 shots, they will push HKFC to Division 2. Similarly, CCC will play at home against Club de Recreio and their positions can be reversed if CCC took maximum points.

In Division 2, Tuen Mun Sports Association has confirmed as champion of the division after gained full points from City Lawn Bowls Club. They will be promoted to Division 1 with runners-up Filipino Club.

For the other divisions, Hong Kong Youth Team in Division 3 and Filipino Club in Division 6 also confirmed as champion before the game this Saturday.

The last game of the Triples League for the mem will be played at 3:00 this weekend, with the women’s last game played next weekend.

On Saturday Feb 27 the Triples League continues (3:00pm) and the Women’s Champion of Champions takes place at KGBC and HKFC starting at 9:00am. On Sunday Feb 28 the National Pairs competition continues: Quarter Final for men (10:00am) and Semi-final for women (3:00pm).