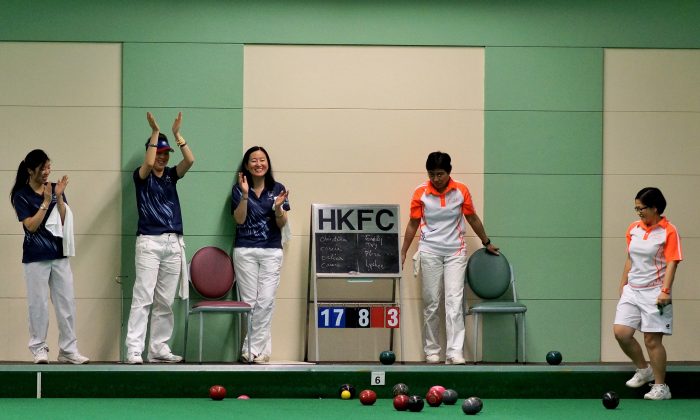 Seabird Sports Club (right) lost their 100% record last weekend, May 16, 2015 when they could only manage a draw at the indoor green of the Hong Kong Football Club. The team is still sitting at the top spot as a number of other Division 1 games were interrupted by poor weather. (Stephanie Worth)
HK Lawn Bowls

CCC Prevails at the Battle of Record Holders

Mother Nature hit out at the league matches again last weekend, Saturday May 16, when some of the greens had to close before the official starting time and a sudden downpour towards the end of the match day further interrupted more games.

In the men’s Division 1, despite only three of the five games being finished on schedule, the outcome did impact the league table quite a bit.

All eyes were on the game between the two record holders Craigengower Cricket Club and Kowloon Cricket Club, who have both won the most top flight titles. Before the game KCC was in second and CCC was in third, with the top spot occupied by the defending champion Kowloon Bowling Green Club.

CCC was hosting the game and both teams started the match with their strongest line-up, in fact all skippers were either current or former Hong Kong internationals.

Same as most games around the territory, the game was stopped in the middle for more than an hour before it could be resumed.

CCC new recruit Lee Ka Ho was always on the chasing end in his game against former Hong Kong No.1 Noel Kennedy, who was supported by top bowler Ken Chan. The score was tied in the second, fourth and sixth ends, but that was all the resistance that Lee could offer. The game quickly opened up and Kennedy prevailed at 19:11.

The game between CCC’s Jacky Wong and Jimmy Chiu was quite a tight game. Wong opened up a lead of 13:5 after 10th end only for Chiu to crawl back and surpass him 15:14 with two ends remained. But Wong had the final laugh as his team scored one apiece in the last two ends to register a narrow victory.

As CCC’s Kevin Fung beat Chadwick Chen with a big margin of 24:11, CCC finally recorded a 6-2 victory in this crucial match. With the help from their friendly neighbour Hong Kong Football Club who handed leader KBGC their first defeat of the season at home, CCC are now level on points with KBGC and sit atop of the table with a better shot difference. KCC are in third place with two points less.

Women’s section
In the women’s Premier League, only two Division 1 games were completed on schedule with the most significant result being that leader Seabird Sports Club were held to a draw at the indoor green of Hong Kong Football Club. The team are still leading the table with six points, but the second place HKFC still has a game in hand.

At the bottom, United Service Recreation Club remained in the last position after registering their fourth straight defeat.