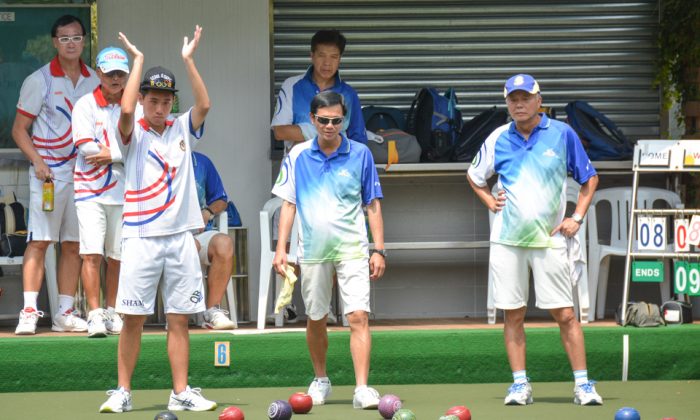 In the postponed game between the Police and Kowloon Bowling Green Club last Sunday, Sept 25, Martin Sham (hand raised) of KBGC applauds a good bowl from his skipper Anthony Yip (not in photo). The game finished at 14-14 but KBGC prevailed with a 3-5 victory. The defeat pushed the Police team into big trouble and they need to win their last two games to survive. (Stephanie Worth)
HK Lawn Bowls

CCC Lead by 13 Points With 3 Games To Go

HONG KONG—No changes at the top or bottom of the Premier League Division 1, despite 4 of the 5 games played last Saturday finishing 8-0. Table-topper Craigengower Cricket Club look certain for their first top-flight title in 22 years and bottom team Island Lawn Bowls Club still needs to win all their remaining games to maintain their slim hope of survival.

CCC, Kowloon Cricket Club and Kowloon Bowling Green Club all recorded 8-0 victory at home over the weekend. With a number of postponed games also played in the last few days, the league table is now in a better shape with CCC leading by a big margin of 13 points. They just need 10 points from the remaining 3 games to be crowned. With 2 home games in last 3 rounds, it seemed that their title is just a matter of time.

The team has accumulated 83 points so far, followed by KCC and KBGC who are both holding 70 points.

At the other end of the table, ILBC instilled new hope to their relegation fight as they defeated the Police team 8-0 at home. Despite the win they are still 28 points away from safety. With 4 games left, they need to win every game and hope the other results go their way.

The Police team dropped into the relegation zone after losing to ILBC. Although they have played 1 game more than the others, their chance of survival remains high as they will play at home against the 2 teams directly in front of them in the last 2 games.

Currently, not counting ILBC, the 3 teams fighting for survival are the Police, Hong Kong Cricket Club and KBGC-B.  They are only separated by 1 point.

With 3 games to go, 2 teams have confirmed their relegation for next season, they are the B team of Victoria Lawn Bowls Club in Division 7 and the C team of United Service Recreation Club in Division 8.

In the women’s Premier League, defending champion Hong Kong Football Club’s quest for their 10th consecutive title suffered a minor blow when they were defeated 2-6 at home, at the hands of relegation-threatened Indian Recreation Club.

The slip of both clubs allowed Kowloon Cricket Club to move to the summit, after defeating 4th-placed City Lawn Bowls Club 8-0 at home. They now top the table with 79 points, a point more than the defending champions. STSA are further behind with 73 points but with a game in hand.

At the bottom is a dogfight between SBSC, KBGC and Club de Recreio, who are only separated by 5 points.

In the Division 3, the B team of Club de Recreio became the 1st women’s team to confirm promotion for the new season. They now lead the table with 89 points, 26 points more than third placed HKFC-C.

This weekend in Lawn Bowls

There is an invitation event at Indian Recreation Club from 9am to 6pm this Saturday Oct 1.

Claudius Lam is an officer of the Kong Long Lawn Bowls Association.