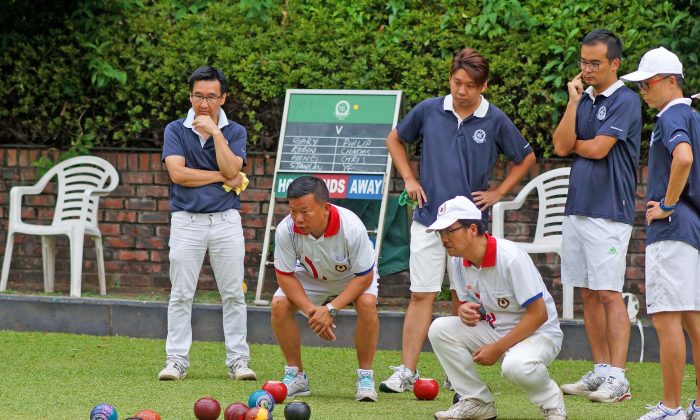 A tense moment for (L to R) back row Gary Pun, Lui Chi Hong, Robin Chok and Skip Stanley Lai of CCC-A as KBGC-A Philip Chan and Chris Chiu watch their Skip, Ye Sui Ying's last wood draw close to the jack to take 5 shots on the 17th end. However, Lai's team took 2 shots on the last end to win 20/15 with an overall score of 8/0 to CCC-A, and top position on the league table. KBGC-A lie second with 2 games in hand. (Mike Worth)
HK Lawn Bowls

CCC went into the home game with a 6 point lead over KBGC and their desire to extend such lead was shown right from the 1st end.  All 3 rinks lead in the early part of the game and held on to an 8-0 victory to subdue their biggest title threat. CCC’s elite young bowler Lee Ka Ho also took the chance to defeat Macau international James Cheng to move to the top of the skip table on shots difference.

The team played a postponed game against the Youth Team in Taipo on Sunday, September 18, and achieved a 4-4draw.

After the 2 games CCC lead the 2nd-placed KBGC by 18 points, but have played 2 games more.  This coming Saturday will see a clearer picture of the title fight as KBGC will play two home games on the same day. They will face last year’s runners-up Kowloon Cricket Club in the morning and Hong Kong Football Club in the afternoon.

In fact, the 8 teams between 2nd and 9th are only separated by 7 points so all of them will need to work hard to avoid relegation.

Rock bottom Island Lawn Bowls Club registered their 2nd draw of the season against a strong Kowloon Cricket Club team at home.  Despite of the draw, the gap between themselves and safety is a massive 32 points.  With only 5 games left, their relegation fight may well be over if they cannot collect any points against the struggling Police team this weekend.

In the women’s Premier League, all results were in favour of the defending Hong Kong Football Club and it again looks quite possible for them to achieve their 10th consecutive title as they moved back into the top position.

In a match between the 2nd-placed Shatin Sports Association and 3rd-placed Kowloon Cricket Club, KCC utilised their home green advantage to take the game 6-2.  Fourth-placed City Lawn Bowls Club also lost to the B team of HKFC 2-6.  After defeated the bottom team Seabird Sport Association 2-6 away from home, HKFC-A opened up a lead of five points against KCC.

STSA, who has been the runners-up to HKFC-A for the last two years, was trailing the defending champions by seven points but STSA have a game in hand.

The Premier league continues on Saturday Sept 24 at all greens in Hong Kong starting at 2:30pm. Nong’s National Singles (Round 5) will take place on Sunday Sept 25, starting at 10am for men and 3pm for women.