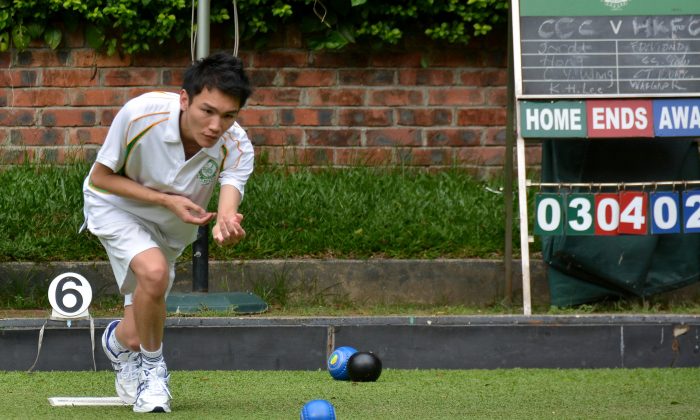 Craigengower Cricket Club will continue its quest to challenge for the Premier League title this weekend away at Filipino Club. Their success so far was largely due to the recruit of elite players from other clubs, including top youth player Lee Ka Ho (photo) who joined from Kowloon Bowling Green Club last year. (Mike Worth)
HK Lawn Bowls

Craigengower Cricket Club (CCC) continues its quest to win their first topflight title in 20 years when the campaign resumes this weekend, August 29, after a brief summer break.

CCC, who last won the title back in 1994 when the club celebrated its centennial, is now top the table with a two point lead against the defending champion Kowloon Bowling Green Club. Their results were largely due to the recruitment of a number of elite players in the last few years, including the reigning Bowler of the Year Wong Chun Yat and young bower Lui Chin Hong, who made his debut for the club this year.

They will play away at Filipino Club on Saturday hoping to repeat the 8:0 results achieved at home in the earlier part of the campaign.

For KBGC it will be an internal affair this weekend as the team A will play against team B in the first game in the second half of the season. While the team A is eyeing to defend the title, the KBGC-B is only six points above the relegation zone so they will need to play hard to secure their safety.

2012 and 2013 champion Kowloon Cricket Club, who is now fourth and is eight points less than the leader, will play second from bottom Island Lawn Bowls Club hoping to better last year’s results of runners-up.

In Division 2, Hong Kong Cricket Club continued to push for their third promotion in four years. They have opened up a lead of eight points at the top and were followed by City Lawn Bowls Club. At the bottom, CCC-B has been anchored to this position since the first week of the campaign and will need to play harder to survive.

Women’s
In the women’s section, Hong Kong Football Club A team is on course for their ninth successive title as they are now leading the table by four points.