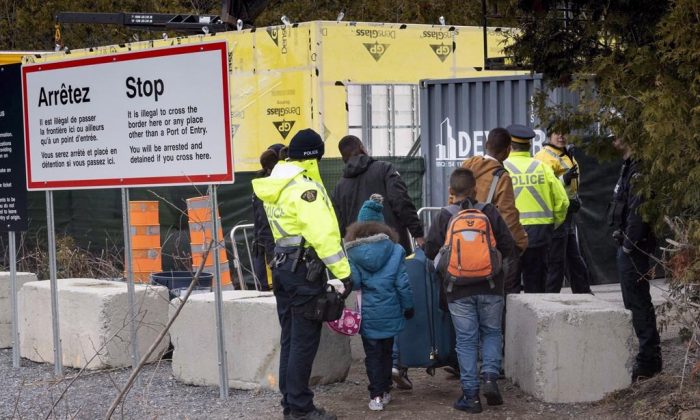 A family, claiming to be from Columbia, is arrested by RCMP officers as they cross the border into Canada from the United States as asylum seekers on April 18, 2018 near Champlain, New York. (Paul Chiasson/The Canadian Press)
Canada

OTTAWA—New federal figures shows the Canada Border Services Agency has removed fewer than 900 asylum seekers who have crossed into Canada by exploiting a loophole in asylum laws.

Since early 2017, more than 45,000 migrants have arrived in Canada”irregularly” by entering the country through a forest path between New York State and Quebec—avoiding official border checkpoints where they would be turned away and told to file a refugee claim in the United States.

So far, only 866 have been removed from Canada after their refugee claims were rejected.

The Immigration Department says a big reason the number is so low is because removal orders can only be enforced once an asylum seeker has exhausted all legal avenues to try to remain in the country.

The avenues can include appeals of rejected claims, or undergoing a pre-removal risk assessments to determine whether sending a migrant back to their home country might put them in danger.