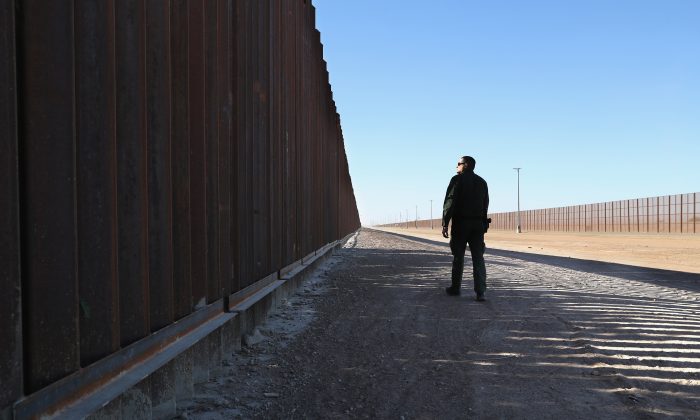 A Border Patrol agent at the U.S.-Mexico border fence in San Luis, Ariz., on Nov. 17, 2016. The U.S. government built triple fencing to deter illegal immigrants and smugglers who previously easily crossed the border there. (John Moore/Getty Images)
US News

A CBS News reporter said he was threatened by a human smuggler along the U.S.-Mexico border after he filmed a smuggling operation.

David Begnaud and his crew caught the smugglers on camera near Roma, Texas, along the Rio Grande. In the segment, he saw a man using a raft smuggling people across the river near the official port of entry, where dozens of armed guards are stationed.

As he is recording the incident, he sees a man to his right speaking in Spanish. He was told to leave if he valued his safety.

“He ends up saying to my producer and I, ‘It’s not safe here and you need to go,” he said in his July 11 report. “We ended up leaving the area. Within ten minutes [of crossing a bridge] we were back on the U.S. side. The [different] man who was paddling actually walked across. That’s how shallow it is there in the river. He was able to walk back onto the other side. He gave us the middle finger and faded off into the treeline.”

“We were scared,” he later said, adding that the man had made “ominous” comments and had a walkie-talking in his hand.

In a tweet, Begnaud tweeted that the man, who he identified as a smuggling scout, “threatened us.”

Today, on assignment in Mexico, producer Mark Hooper & I saw a “scout” guide a smuggler across the Rio Grande, in a raft, to deliver 2 people to the U.S. who entered illegally right near a legal border crossing.
The scout threatened us.
Our report: https://t.co/K8OdASmbGI

He said the incident highlights an issue that the U.S. Border Patrol has frequently complained about: The Rio Grande is shallow and easy to cross.

A Border Patrol source told Begnaud that the human smuggling attempt took place during a Border Patrol shift change, and he said, according to the source, they know when it is.