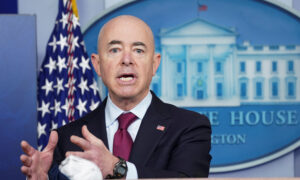 The U.S. Customs and Border Protection (CBP) released a video on Wednesday that shows two young children being dropped over the border barrier along the U.S.-Mexico border.

“I’m appalled by the way these smugglers viciously dropped innocent children from a 14-foot border barrier last night,” El Paso Sector Chief Patrol Agent Gloria I. Chavez said, according to a press release from the department.

“If not for the vigilance of our Agents using mobile technology, these two tender-aged siblings would have been exposed to the harsh elements of desert environment for hours,” she added.

The children, identified as two Ecuadorian sisters aged 3 and 5, were immediately transported to the Santa Teresa Border Patrol Station for medical evaluation after being rescued by CBP authorities.

An agent with the Santa Teresa sector, which includes parts of Texas and New Mexico, captured the moment a smuggler viciously dropped the sisters over a 14-foot-high barrier before fleeing the area, abandoning the helpless sisters on the north side of the international boundary line.

“We are currently working with our law enforcement partners in Mexico and attempting to identify these ruthless human smugglers so as to hold them accountable to the fullest extent of the law,” Chavez said.

Over 16,500 unaccompanied children were in the custody of either the CBP or the HHS as of March 23, according to the HHS Administration for Children and Families.

Republican lawmakers have argued that the border crisis is a result of President Joe Biden’s move to reverse several Trump-era immigration policies designed to curb the flow of illegal border crossings. This includes his predecessor’s cornerstone Migrant Protection Protocol, which effectively ended the problematic “catch and release” policy, significantly stemming the surge of illegal immigrants that were seen at the southern border in 2019.

“I’ve seen the video and I think any of us who saw the video were incredibly alarmed by the steps of smugglers, ones that we have been quite familiar with,” Psaki said during the White House briefing.

Sen. Ted Cruz (R-Texas), who led a delegation of Republican senators to the border in late March, called the situation at the border a “heartbreaking” humanitarian crisis that is a “direct consequence of policy decisions by the Biden administration.”

“This needs to stop. It is a crisis, it is a tragedy and it is a man-made crisis. This was avoidable. This was preventable,” the Texas senator said.

The Biden administration, on the other hand, has sought to shift the blame onto the administration of President Donald Trump, with Homeland Security Secretary Alejandro Mayorkas saying that the previous government had “dismantled the orderly, humane, and efficient way of allowing children to make their claims under United States law in their own country.”