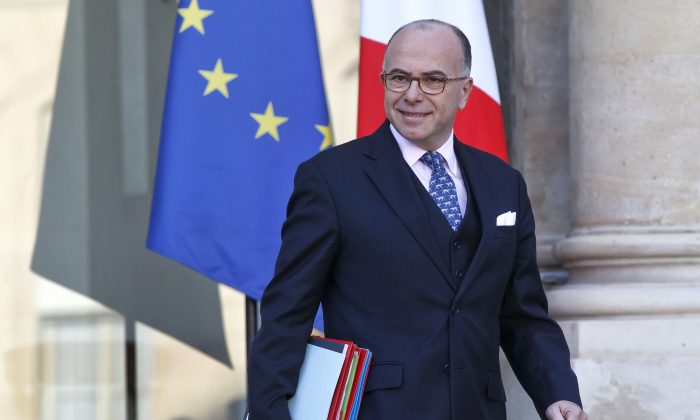 Cazeneuve Is France’s New Prime Minister as Valls Steps Down

PARIS—The man who served as France’s top cop during a series of bloody terror attacks became the nation’s new prime minister on Tuesday after Manuel Valls stepped down to focus on running for president.

Conceding he is “not a favorite” to win the presidency, Valls resigned as prime minister a day after announcing he would run to replace the man who appointed him, unpopular Socialist President Francois Hollande.

Hollande, who announced last week he would not seek a second term, named Interior Minister Bernard Cazeneuve, a close ally, to replace Valls.

“I was a happy prime minister” despite challenges that included terror attacks, Valls said in a ceremony transferring power. “I leave in calm … (because Cazeneuve) is a man of state.”

“You are a friend, a brother,” he added.

Both men made clear that coping with the string of terror attacks that claimed more than 200 lives since January 2015 bonded them as they worked hand-in-hand. Cazeneuve also praised the “friendship” between himself and Valls.

Cazeneuve, always cool and composed, became a popular figure while fighting for measures to tackle extremism in France, including three counterterrorism laws and one intelligence law.

He has been in charge of implementing France’s state of emergency following the Paris attacks that killed 130 people in November 2015.

Cazeneuve, 53, said his goal as prime minister will be “to protect, progress, prepare the future.” He acknowledged his tenure in the post would be brief, but said “each day is useful. Each day counts.”

Valls hopes to unite France’s Socialist party and to give the left a chance to remain in power at the Elysee Palace after France’s two-round presidential election in April and May.

Current opinion polls, however, suggest that the second round could pit Marine Le Pen, the leader of the far-right National Front, against conservative Francois Fillon, also a former prime minister.

Valls acknowledged in a Tuesday night interview on France-2 television that “I’m a challenger. I’m not a favorite.”

But he said he doesn’t want the left eliminated.

Valls is the top contender in next month’s primary for Socialist candidates and their allies but faces tough competition from former Economy Minister Arnaud Montebourg and former Education Minister Benoit Hamon, party rebels who back more left-leaning policies.

Valls is known for his outspoken, authoritarian style and tough views on immigration and security. He vowed Tuesday to temper his approach during the upcoming campaign, saying “you will not hear a single unpleasant word from me.”