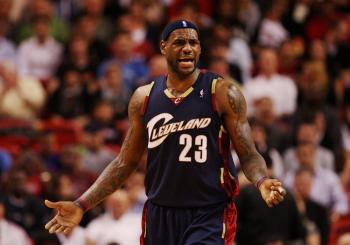 LeBron James had to play peacemaker in the fourth quarter of Cleveland's game against New Jersey on Tuesday night after a Devin Harris flagrant foul. ( Doug Benc/Getty Images )
NBA

Dan Pomerleau
View profile
Follow
biggersmaller
Print
LeBron James led the Cleveland Cavaliers (18–7) in fending off the New Jersey Nets’ (2–23) Brook Lopez in Tuesday night’s game at the Quicken Loans Arena in Cleveland. The Cavs topped the Nets 99–89 to bring their winning streak to three games, but the matchup was not a cakewalk by any means.

Lopez—the NBA’s top scoring center with 19.5 points per game—notched his 14th double-double in only his second season in the NBA, scoring 22 points and racking up a game-high 15 rebounds.

Lopez was matched by guard Devin Harris with 22 points and three assists, but the latter didn’t make it through the end of the game after being ejected for a flagrant foul against Jamario Moon with 3:38 to go in the fourth quarter.

The foul almost caused a brawl between the two teams but LeBron was able to cool the waters in time to prevent Shaq from bringing his 325 pounds to bear against the slender Harris.

Shaq started the game off strong for the Cavs with seven points in the first few minutes before LeBron James and Mo Williams began with their usual contributions.

The Cavs looked poised for a runaway first quarter until Harris and Lopez made it rain for the Nets to bring the score within eight points.

Both teams played their bench heavily for the majority of second quarter, with the only difference that the Cavs bench was actually able to deliver with King James leading them on.

With the starters back in for both teams to end the second, the Nets were wise to put the ball back in the hands of Lopez. The big man scored 11 more points and grabbed three more rebounds to end the half with 20 points.

The Nets stayed with the Cavs in the third and fourth quarters, with sixth man Rafer Alston carrying the team with a stellar 18-point performance in the fourth quarter alone. But LeBron, O’Neal, Ilgauskas, Moon, and Mo Williams all combined to keep the Cavs lead in tack.

LeBron finished with 23 points to match his number, and had seven assists and six rebounds. O’Neal finished the night with 16 points, two assists, and five rebounds.

This was the closest loss for the Nets since their second win of the season against the Chicago Bulls last Wednesday, and it was the first time they faced the LeBron-Shaq duo this year.

Missing play from injured lead man Chris Douglas-Roberts—averaging 16.2 points per game—was invariably a factor in the loss. The fact that the team was able to pull within 10 points without Douglas-Roberts suggests that they are finally developing the depth they need this season.

The Charlotte Bobcats last minute push at the end of the fourth quarter caught the New York Knicks by surprise and cost them the game 94–87 at the Time Warner Cable Arena in Charlotte on Tuesday night.

After a close first half with the Knicks up by one, they put on a third quarter scoring surge to maintain a near consistent 10-point lead.

The Bobcats rallied in the fourth quarter with eight unanswered points to tie the score at 74 four minutes into the quarter until Chris Duhon hit free throws and Jared Jeffries hit a clutch 3-pointer to bring the score up by six.

But Charlotte put the heat back on at the end of the fourth with sixth man Flip Murray hitting a 26-foot 3-pointer from the right wing with 1:57 to go, tying the score at 85.

The last minute was all Charlotte’s with Raymond Felton scoring off a driving layup and Stephen Jackson dunking the ball seconds later after Felton stole the ball from Duhon.

Jackson then stole the ball from David Lee and Felton forced a shooting foul from Al Harrington. He stuck his free throws to close the game with the Bobcats up by seven points.

The Knicks had solid play from all of their starters, who all managed to hit double-digit scoring.

Jackson and Gerald Wallace were the Bobcats’ leading scorers with 24 points and 21 points, respectively.