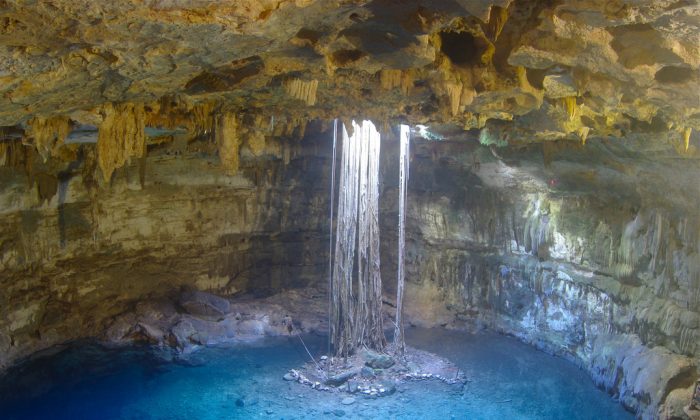 "We knew from previous research that microbes do play a role in cave development," says Jennifer Macalady. "What we were trying to assess was the extent of that contribution, which would help us understand how caves all over the world, as well as on other worlds, form." (Adam Baker/CC BY 2.0)
Environment

Caves Get Bigger When Microbes Eat This

Limestone caves can form when solid limestone dissolves after coming in contact with certain types of acids. The resulting void is the cave system.

“We knew from previous research that microbes do play a role in cave development,” says Jennifer Macalady, associate professor of geosciences at Penn State and coauthor of a new paper published in Chemical Geology. “What we were trying to assess was the extent of that contribution, which would help us understand how caves all over the world, as well as on other worlds, form.”

In hydrogen-sulfide-rich caves, microbes “eat” the hydrogen sulfide through a process known as aerobic respiration, Macalady says. The byproduct of this process is the creation of sulfuric acid, which has the potential to dissolve limestone and contribute to cave growth.

“The main goal of our study was to investigate what happened to hydrogen sulfide in the cave, because when the microbes use hydrogen sulfide for energy, this, along with oxygen, leads to the production of sulfuric acid,” says Macalady.

The researchers measured oxygen levels and the amount of chemicals degassing—changing from liquid to gas state—throughout several parts of the cave system. The Frasassi system has cave pathways that formed 10,000 to 100,000 years ago as well as currently actively forming cave pathways, allowing the researchers to compare their measurements and identify the factors contributing to active development.

“What we found is that in certain conditions, the hydrogen sulfide in the water escapes as a gas into the air above the water instead of being ‘eaten’ by microbes below the water surface,” says Macalady. “As a result, the underwater microbes only partially burned hydrogen sulfide. Instead of creating a byproduct of sulfuric acid, they created pure sulfur as a byproduct, which is not corrosive to limestone.”

In contrast, the microbes above the water’s surface completely “ate” the hydrogen sulfide. This process results in the creation of sulfuric acid, which dissolves limestone and contributes to cave growth.

Macalady says the results would apply to all limestone caves that are rich in hydrogen sulfide, which includes more well-known caves such as Carlsbad Caverns and Lechuguilla Cave in New Mexico and Kap-Kutan Cave in Turkmenistan.

Co-authors include researchers from the University of Minnesota, Max Planck Institute for Marine Microbiology, and Utrecht University. The National Science Foundation, NASA Astrobiology Institute and the Max-Planck Society funded the work.