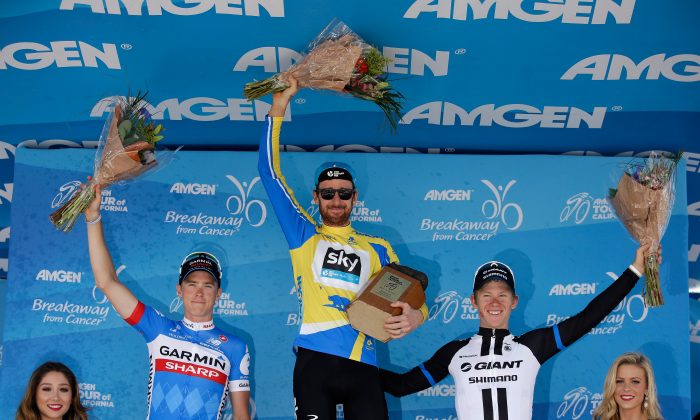 The final stage of the Tour of California came down to a sprint finish, and to nobody’s surprise, Mark Cavendish, The World’s Fastest Man, was faster than everyone else. It was the second stage win for the Omega Pharma-Quickstep rider, and showed that Cavendish is in fine form for the Tour de France this July.

Cavendish lost touch with the leading riders on the final categorized climb; he fought his way back, catching the peloton 15 km from the finish, then found the legs to win the final sprint.

“I punctured at the bottom of the climb and had to ride the whole climb on my own, chasing,” Cavendish told Cyclingnews.com. “I chased all the way and caught back on the descent. I figured if I could do that I’m going OK, I’ll try to hang on the last lap.

“I did that; my team waited with me, we floored the descent and gained a lot of time back on the descent. My team were incredible pulling back the group. They had some goods today.”

Mark Cavendish (R) of Omega Pharma-Quickstep celebrates his victory over John Degenkolb (L) of Giant-Shimano in second place and Peter Sagan (C) of Cannondale in third place in Stage Eight of the 2014 Amgen Tour of California. (Doug Pensinger/Getty Images)

Cannondale’s Peter Sagan started the sprint, with Cavendish on his wheel. Cavendish dropped the competition 50 meters from the finish, but was nearly caught at the line by Giant-Shimano’s John Degenkolb who put in a late burst.

“I just wanted to follow Peter [Sagan] and jump when he hit out,” Cavendish explained. “I tried to follow him, and then Giant came so I got in there and squeezed Degenkolb out as we came through the last corner. Peter launched, and I knew with 200 to go I still had the speed after a week of racing, so I just went.

“I was lucky to win,” Cavendish said. “I celebrated a bit early; John [Degenkolb] nearly came by. I don’t want to see the photo finish.” Cavendish had reason to worry; he won by only six inches.

The General Classification victory went to Sir Bradley Wiggins of Team Sky. Sir Bradley beat Garmin-Sharp’s Rohan Dennis by 30 seconds, most of it gained on the Stage Two time trial, but defended ably on the summit finish of Stage Six.

Sir Bradley Wiggins of Team Sky, accompanied by his children, Isabella and Ben, is awarded the yellow jersey following Stage Eight of the 2014 Amgen Tour of California. (Ezra Shaw/Getty Images)

Wiggins thanked this teammates for his overall win. “I’ve said it every day, without those guys I wouldn’t be here right now,” Wiggins told NBCSN. “As strong as my performance was individually in the time trial, the team have took the strain all week. Those young Americans on our team did a fantastic job—Joe [Dombrowski], [Ian] Boswell, Danny [Pate]. Even today they didn’t give up the chase, they came back still after the climb. It was a fantastic way to finish.”

Wiggins has won on he track, in Grand Tours, and in the Olympics, but he had never won in California; this race had been on his list.

“Its right up there in satisfaction. It’s always an honor to wear the yellow jersey,” he said. “But I set my stool out to win the Tour of California.  I wanted to add my name to the guys have come before, and I’ve done that now. At 34 it’s nice to still be winning.”

Wiggins, who won the 2012 Tour de France, is on tremendous form; the question now will be, who will Sky send to lead the Tour de France squad: 2012 winner Sir Bradley Wiggins or 2013 winner Chris Froome?

“You’ll get me in trouble asking that,” Wiggins joked. “”Chris [Froome] wants to win a second Tour and I think everyone’s behind him for that, myself included. If I am lucky enough to join to be at the Tour I will be there in support of him.”

Stage Eight of the ninth Amgen Tour of California started with three 32.5-km laps through the countryside around Thousand Oaks and three 7.4-km laps around downtown Thousand Oaks. The first three laps each included the Cat 4 Rock Shop climb, the only categorized climbs of the stage.

Terpstra and Bobridge attacked the break on the second ascent of the Cat 3 Rock Store climb and opened a gap of 1:30 by the third time up the climb.

Several riders attacked on the final climb and the descent but it didn’t matter; the peloton was determined to mop up the break before the city laps started. Race leader Sir Bradley Wiggins led the final charge to catch the escapees, which set up the maneuvering by the sprinters to control the finish.

Only about 40 riders were still in the lead group when the catch was made; a second group laid about 1:10 back. This group, led by Omega Pharma-Quickstep riding for Mark Cavendish, made it back to the leading group with two laps still to ride.

Four riders attacked at the start of the city laps. These four—Jack Bobridge, Jens Keukeleire (Orica,) Lucas Euser (UHC,) and Eloy Teruel (Jamis-Hagens Berman) were allowed to stay away until the final lap, when the peloton easily reeled them in and rode past them. Teruel lasted until five K, but he couldn’t hold off the might of Omega, Trek, Cannondale, BMC, and Bissell, all intent on setting up their sprinters.

The road was wide leading towards the finish line, and no team could control the front of the race. Giant took the best shot, trying to lead out John Degenkolb, but he proved no match for Omega’s Mark Cavendish. Cannondale’s Peter Sagan finished third, an impressive performance against two of the fastest pure sprinters in all of cycling.