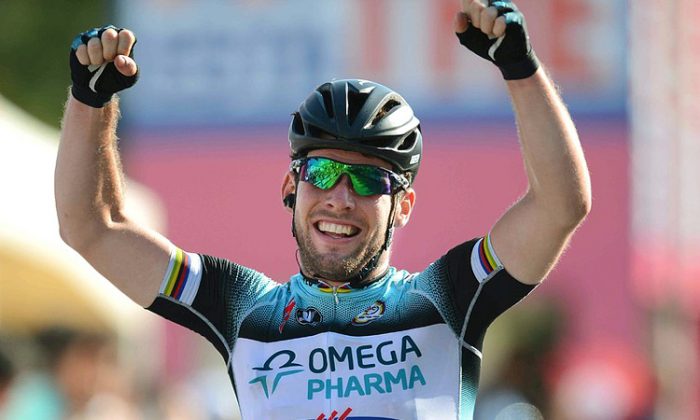 Stage Six of the 2013 Giro d’Italia ended with the predicted bunch sprint, and as predicted, Omega Pharma-Quickstep’s Mark Cavendish took the win. “The Fastest Man in the World” got a good leadout for a change, and made the most of it.

The sprinter, who had the best leadout in all of cycling when he rode for HTC, had been critical of his Omega team mates after most of their leadout attempts failed. He was effusive with praise when it finally went right.

“It was incredible, no problems, nothing went wrong. Everybody rode until their legs couldn’t go any more. Sort of how it feels when you get a leadout right, when you’ve won a lot of races without the correct leadout, it makes it all the more special when it goes to plan.”

The 26-year-old Manxman aptly if oddly described his feelings: “Imagine you get a kit car, like a Caterham or something, and you build it, when you start it you know that feeling, it’s like that.

“There’s all these bits of the engine that fit together—I’m just the exhaust, I’m, the last thing, the thing that makes the most noise.

“Imagine you start it and it works, that’s how it feels; everything just fits together, and you come away. If you do everything right you do it better than the others and you get the win.”

After thanking his team, he told Eurosport.com that he dedicated the win to Wouter Weylandt, the Belgian Quickstep rider who died on May 9 after a crash in Stage Three of the 2011 Giro.

Weylandt was the first rider to die in a Grand Tour since 1995, thus the only rider known by the current generation of competitors. Only 26—the same age as Cavendish—when he died, Weylandt was much liked by everyone in the peloton, and much missed—and obviously not forgotten.

It must be noted, that while Cavendish is still incredibly fast, there are others who can mount a good challenge. As in Stage One, Cannondale’s Elia Viviani was again second to the Manx Missile; Orica-GreenEdge sprinter Matt Goss was right there as well, and FDJ’s Nacer Bouhanni not far behind.

The days when it is automatically assumed that every sprint stage is a win for Cavendish may soon be over; however, on this day, he was once again the fastest man in the World.

The General Classification did not change: Luca Paolini of Katusha still wears the leader’s pink jersey.

Finally, a Stage Goes as Predicted

Stage One of this year’s Giro went according to plan: it ended in a bunch sprint, and Mark Cavendish won.

It didn’t go exactly to plan for the Omega Pharma-Quickstep team; leadout rider Gert Steegmans had gear problems, leaving Cavendish to fend for himself. The powerful sprinter pulled through and took the win. And even then, the final 15 km were unusual, because 2o12 winner Ryder Hesjedal attacked repeatedly on the final descent.

The Stage Two team time trial offered no unusual outcome; Sky powered to the win. That was the last predictable outcome until Stage Six.

Luca Paolini surprised everyone with a late attack in Stage Three which earned him the win and the leader’s jersey. Bardiani’s Enrico Battaglin won Stage Four with an unexpected burst in the final 15 meters; it was his first Grand Tour stage win. Stage Five went to John Degenkolb after a major pile-up stopped the peloton. It very nearly went to Bardiani leadout rider Marco Canola.

Stage Six was—finally—a completely uneventful stage. The weather was perfect, the route was basic—pan-flat with a long straight finish—and everyone cooperated to ride a normal sprint stage.

The expected breakaway was reeled in at the expected time, and the sprint went to the winningest sprinter in the peloton.

The Breakaway, the Catch, the Sprint

Two riders, Cameron Wurf of Cannondale, and Jack Bobridge of Blanco got away 15 km into the stage, but the peloton didn’t let them get much of a gap. This year’s Giro doesn’t have many real sprint stages—most of the “sprint” stages have some serious climbs—so on this completely flat stage, the sprinters’ teams are absolutely fixated on fighting it out at the finish.

Omega Pharma-Quickstep and Francais des Jeux did most of the pace-setting, keeping the gap around three  minutes—too long for a rider to bridge across but short enough to shut down easily.

The middle of the race didn’t offer much action. Even the intermediate sprints weren’t hotly contested—Cannondale’s Elia Viviani won both, but no other team really set up a leadout.

Some interest was generated when a trio of riders went the wrong way around a traffic island and ended up on the wrong side of a divided highway. The road was lined with four-and-a-half foot guardrails, so climbing over would be a huge loss of time. This group rode on for several minutes next to the peloton, waiting for a break in the barrier.

It worked out, as the peloton slowed almost to a walk in the feed zone—the misdirected riders didn’t lose much.

The peloton caught the break 36.5 km from the finish—a bit early, as it would seem to invite counterattacks. Possibly the peloton wanted to take care of the break before entering the finishing town of Margherita di Savoia, where the route circled twice around a 16-km lap.

That turned out to be a wise decision: a crash in the first third of the peloton blocked the road and split the peloton.

Three quarters of the peloton were stuck behind the tangle of riders and bikes. Some of the GC contenders including Bradley Wiggins, who had dropped back for a mechanical adjustment, were held up.

Katusha took the front and slowed the pace to let stalled riders catch up—Sporting decency dictates that riders who weren’t held up, not take unfair advantage. Further, almost every team had riders hung up. Pushing on at a high pace might have benefited a very few riders but most teams had either a sprinter or a GC contender stuck behind the blockage. If good sportsmanship didn’t convince some riders to ease the pace, race tactics did.

Bradley Wiggins’ Sky team organized the chase back to the peloton. Once the chase was well under way, Omega and FDJ resumed the head of the peloton and proceeded at a more normal pace.

The crash, coupled with the crash which cost Wiggins in Stage Three, threw a scare into the Sky squad. Once they caught the peloton, they worked to the front and took the lead. Wiggins himself set the pace until the three-kilometer mark; once he was inside that, he knew he would get the same time as the rest if he got held up again.

One rider made a futile attempt to attack the bunch with 5.3 km to go—Saxo Tinkoff’s Manuele Boaro opened a gap of a few dozen meters, but the peloton was flying; he didn’t last 500 meters out front.

The final three kilometers were confused; too many teams wanted to get lined up for the sprint.

One more rider made an even more futile attempt at a late attack: Vacansoleil’s Pim Lithgart made a huge effort to get off the front of the peloton, but he had no chance. By that time, everyone was riding flat-out, and no single rider could match the pace of the peloton at full gas.

Too many teams wanted to get their sprinter to the front in the final couple of kilometers for any team to maintain organization; no team could maintain control of the peloton.

Coming into the final kilometer Argos and Cannondale were the best organized, but Argos only had two riders while Cannondale had three. Argos sprinter John Degenkolb ran out of riders and had to launch far too early; when he took off, several riders moved up, swamping Cannondale.

Cavendish was calmly following his leadout man Gert Steegmans, who delivered his charge to the 100-meter mark before pulling aside. By that time Viviani had fought through to the front, and he and Goss, Bouhanni, and Androni’s Mattia Gavazzi had also gotten to the front, but none of them could match the Manx Missile. Cavendish had a bike’s–length lead as he crossed the line.

Stage Seven is wide open for almost any kind of outcome—except a bunch sprint. The entire route goes either up or down; there is barely a kilometer of flat road in the 177 kms from San Salvo to Pescara, while there are four categorized climbs. None of the climbs are too serious—two Cat Threes and two Cat Fours—but with all the other small climbs, this stage could test the legs of the riders.

This stage could be perfect for a breakaway win; there are so many places to launch attacks, and riders with no GC aspirations could decide to go crazy and burn themselves out trying for a stage win.

On the other hand, Katusha knows that Paolini will not be in pink after the Stage Eight time trial, so they might ride hard, which would force the other GC contenders to use more energy than they might want. The big teams—Sky, Astana, BMC, Garmin—might decide to let Katusha go and even let Paolini win the stage, so long as they don’t lose any time to each other. Ryder Hesjedal, Bradley Wiggins, Cadel Evans and Vincenzo Nibali will be much more focused on doing well in Stage Eight than contesting Stage Seven.

Or, the whole peloton might stay together, catch any escapees before the finish, and end with a bunch sprint which doesn’t include any sprinters—possibly even a sprint between the GC contenders.