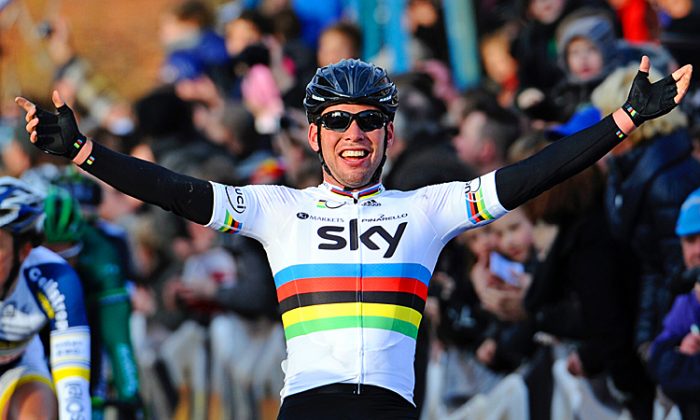 The Manx Missile has a new team but still has his old form: Sky’s Mark Cavendish won the bunch sprint finish of Stage Two of the Tirreno-Adriatico cycling race, beating Katusha’s Oscar Freire and Garmin-Barracuda’s Tyler Farrar after a long, slow stage across the Italian countryside.

“It was a difficult day on paper but it wasn’t too fast for the guys so there were a lot of fresh legs and it was important for me to have the team around me, keeping me at the front,” Cavendish said on the team Sky website.

“In the last 60 ks there was lots of wind, lots of corners and lots of hills so it was important to stay up there. I was never out of the top 15 because I always had strong guys in front of me. Jez [Hunt], Bernie [Eisel] and Mat Hayman did an absolutely incredible job.

“In the final Edvald did 1500 metres in the wind, just keeping me protected. Then with 200 metres to go Farrar hit the front and I was able to sprint to the finish. I’m super, super happy, that was an incredible job by the guys today.

“With the team we have and the form we’re all in it’s a big boost to confidence for Milan-San Remo.”

Stage Two was a definite sprinter’s stage, despite the length and two long categorized climbs, at Volterra Castellina, in the middle. Neither was steep on average, but both had some extremely steep ramps—Castellina, 8.8 km at 4.9 percent average, had some sections at 14 percent. The final 70 kilometers (43 mi.) were mostly flat, though there was a short very steep bump five km from the line. The road to the finish was only 20 feet wide; potentially a problem given the huge field of sprinters, but the peloton had a chance to scout the route on the first lap.

Two Italian riders from Italian teams—Farnese Vini’s Diego Caccia and Colnago-CSF INOX’s  Stefano Pirazzi—attacked at kilometer two, certainly knowing that they would get caught. They were out to stay away as long as possible to get some airtime for their teams and sponsors, and to excite the Italian crowd. The pair opened a gasp of six minutes at one point, but the gap was down to three minutes with fifty km to go.

Because of the length of the stage, the peloton didn’t push hard, content to set a gentle pace so the sprinters had some legs left at the line. The chase was relaxed, reeling in the break over sixty kilometers, a few seconds at a time.

The gap dropped to a minute entering the last lap; the peloton decided it was time to go. Within five kilometers the leading pair was caught.

Different teams took turns at the front: GreenEdge, of course, plus Sky and Lotto.

Another Italian pair, Astana’s Enrico Gasparotto and Acqua & Sapone’s Fabio Taborre took a flyer at 8.5 km; the peloton was not concerned. Sky took the head briefly, the Rabobank moved up in force, only to be supplanted by RadioShack-Nissan, with Yaroslav Popovych pulling for Tony Gallopin and Daniele Benatti.

At 3.5 km, the steepest part of the final; small hill, Astana’s Paolo Tiralongo and BMC’s Greg Van Avermaet attacked; again, the peloton ignored the challenge. This pair lasted about as long as the previous, getting caught with 1.9 to go.

The narrow roads caused what everyone feared: a crash split the peloton 1.6 km from the line; anyone who wasn’t at the front was out of luck.

Meanwhile, at the head of the peloton, Garmin-Barracuda was in the lead, with Sky right behind.

The sprint started early with Robbie Hunter leading Tyler Farrar, and Edvald Boasson Hagen behind them pulling for Mark Cavendish. When Farrar started his sprint, Cavendish pulled out on the left, crossed behind Farrar and pulled past on the right near the line. Farrar looked to fade slightly, as Oscar Freire and Peter Sagan, both of whom waited and sprinted late, caught him at the line. Freire took third; Farrar just edged Sagan who finished fourth.

Flu or not, Mark Cavendish once again earned his nickname, Fastest Man in the World. Possibly Garmin started too early; possibly Farrar had the speed but missed the timing; possibly not. Cavendish actually sprinted just as far (he started later but further back) and still took yet another win.

It must be hard for sprinters to keep their morale, seeing the Manx Missile on the roster. Head-to-head, barring collisions in the leadout, Mark Cavendish still cannot be beat.