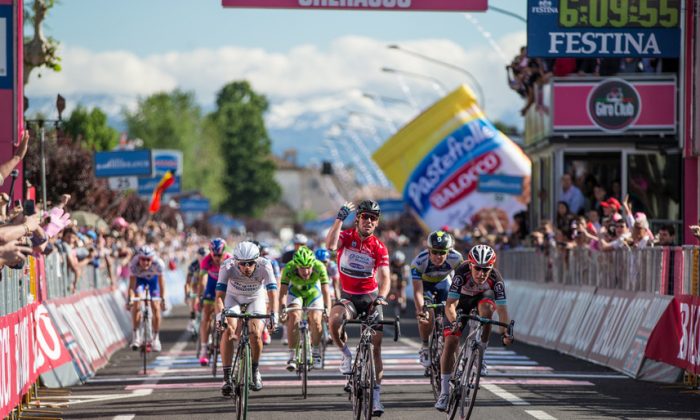 Mark Cavendish once again was “The Fastest Man in the World,” winning the sprint in Stage 13 of the 2013 Giro d’Italia.

Cavendish showed that he has more than just raw speed. The Omega Pharma-Quickstep lost his team mates in the climbs and the chase so the sprinter had to find his own way to the line. He was seventh wheel and boxed in 500 meters from the line, but the experienced sprinter found a small gap, forced his way to the far right, and started his sprint before his rivals.

Cavendish worked hard to go farther, faster, and he did, beating RadioShack’s Giacomo Nizzolo and Argos-Shimano’s Luka Mezgec across the line by about a foot.

“I am so tired. It’s a common misconception that sprinting is the laziest amount of effort,” Cavendish told Eurosport.com. “It takes a lot to do that, especially when you’re at the limit.

“I actually didn’t want to go for the sprint today, but my sport directors asked me to try and we did it. We were pulling, the guys stayed with me on the climbs, they worked so hard for me again and I’m so proud of them.”

“You could see the confidence my team had in me,” Cavendish continued on the team website. “Even when I say I don’t want to sprint, they still ride 100 percent until they aren’t able to go anymore. I said I wasn’t able to win today and they still gave everything.

“You can see the difference in the last meters when your team’s ridden the whole day, even if you don’t think you can do it, if they put every single last ounce into effort into getting you there, then you finish it off.

“If they do this, it’s not possible for me to sleep at night if I don’t win.

“I can always do miraculous things that I don’t think is possible for me to do when I have a team that believes I can do it as well.”

After winning his 100th race in the driving rain the day before, Cavendish had an even harder day in Stage 13. The 254-km stage ended with a pair of climbs, on Cat Three and another unclassified, where some sprinters were dropped.

Cavendish made it over the climbs, then had to make his own way in the sprint. His final flat-out attack was twice as long as usual, and the Omega rider was exhausted after the stage.

Michele Scarponi of Lampre is fifth, 2:3 down. The only other rider inside three minutes is Mauro Santambrogio of Vini Fantini at 2:55.

Nibali is in good shape heading into the harder climbs His team has managed the medium mountains well; if they can handle the longer climbs, the Sicilian rider has a good chance to take his first Giro win.

Cadel Evans—and his BMC team—are question marks. The 2011 Tour de France winner didn’t ride well in 2012, but his form has been first-rate this season. Whether he can sustain that form throughout the 21 stages, and whether BMC has the climbers to protect Evans in the mountains, remains to be seen.

Sky’s Rigoberto Uran is also in great form, but he has lost Bradley Wiggins. Uran and his compatriot Sergio Uran were going to protect Wiggins in the high mountains. Can Henao alone sufficiently support Uran?

Robert Gesink has seemed to be on the verge of breaking through ofr a few seasons. This Giro offers him a great opportunity, and Blanco (formerly Rabobank) is working extra hard this season as they need a sponsor for next year.

Stage 14 is the first of two high mountain stages with Cat One summit finishes, before Monday’s rest day.

Stage 14 starts sloping gently upward after fifty kilometers, to the peak of the Cat Two Sestriere 125 km in. After a steep descent the route climbs the Cat One ascent to Bardonecchia.

There will definitely be attacks on this climb; every rider behind Cadel Evans needs to take this chance to close the gap to Nibali.

Stage 15, ends on the famous Col du Galibier after a cat One and a Cat Two climb tas warm-ups. The Cat One climb to Mont Cenis is halfway through the stage; the Cat Two Col du Télégraphe starts 115 km into the `149-km stage, with only a very brief descent before heading up Galibier, meaning the last 35 km will be almost all uphill.

Again, there will be attacks on this climb. With a rest day following, riders can risk going a little deeper on this stage.

The next mountain stages don’t come until Friday and Saturday of the next week. Stage 18 is a 20-km time trial, which might favor Cadel Evans over Vincenzo Nibali, so even Nibali might try to open a gap over his rivals on this stage.