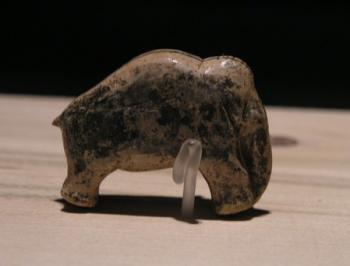 The mastodon was found immediately outside the cave during a 2006 dig. The dig continues into 2009; who knows what other treasures might be unearthed (Joself Jelkic/The Epoch Times)
Beyond Science

By Silke Jeklic
Print
It was a cool afternoon. A small gathering of people assembled at the Swabian village Stetten ob Lontal, in Germany. They waited for a guided trip to Vogelherd Cave.

It cannot be called a real cave, like one that allows you to descend deeply into the earth and that might feature artfully dripping stalactite and stalagmite sculptures, perhaps like the Charlotte Cave and other natural caves found in the Swabian Alps.

Excursion leader Brigitta Roeck led the group in stages up a soft, rain-soaked footpath. Ms. Roeck gave out snippets of information about climate and vegetation in the Aurignacia of 30,000 years ago.

What were people's days like back then? What did they eat? What thoughts did they have? We have only partial answers to our questions. Our limited knowledge is based on archeological discoveries. Aided by modern carbon-dating techniques, we may arrive at new interpretations.

Ms. Roeck told visitors to imagine the landscape of that era with no tress. "No trees," a surprised mother whispered into her daughter's ear. No trees and no hunters in dark woods. It was an epoch between two geological times—two ice ages in southern Germany, but warm enough for a few scrubby bushes to survive in the steppe-like landscape.

The last of the three ice ages was already advancing. There were no settlements 20,000 years ago, and the summer temperatures never topped 15 degrees Celsius (59 degrees Fahrenheit).

Fascination, the joy of the hunt, and being at one with nature had gripped the small group of visitors, undeterred by the weather. They had come to an observation point from which they had an unimpeded view of the Lonetal.

Imagine what it might have been like thousands of years ago—the original Lonetal—and compare the River Lone’s wild body of water with today’s Lone Brook.

The visitors were urged to imagine great mastodon herds, followed by various clans who awaited them at this very promontory. "The Vogelherdhoehle was only a temporary summer camp for these people when they hunted the mastodon," said Ms. Roeck.

During the 1931 dig that took up the whole cave, archeologists found 11 animal carvings made from mastodon ivory, among them, a 30,000-year-old wild horse. In 2006, while the swamp was drained, they uncovered the figure of a lion. That same year, they discovered a mastodon carving. The dig will continue until 2009.

These three art treasures will be returned for one weekend to nearby Castle Niederstotzing, where they will offer their charm and mystique to locals and guests from afar. The lion and mastodon will star as world-class showpieces. Hermann Mader, a local administrator, was instrumental in initiating this special showing.

"The figures represent a type of artistic key, permitting us to gain knowledge about our ancestors' spiritual lives," said Mr. Mader.

That Sunday afternoon, numerous visitors had squeezed past each other through the five thematically arranged rooms. The first one featured a video presentation, where several scenes portrayed people on a hunt.

Ms. Roeck told visitors, "Agriculture did not exist 30,000 years ago, and people got most of their nourishment from meat. Archeological discoveries affirmed that they were healthy and well-fed."

A large box filled with earth was presented to the children. Each child was allowed to dig, find, and keep a personal memento—an old tooth, a tiny rock, or a bone fragment. Next was a room where old hunting pelts, spear points, and tools were on display.

Finally, the fifth room displayed the highlight—the wild horse, the lion, and the mastodon, shown separately in three glass display cases in the center of the room. Was the wait in the long line worth it? Children and adults alike stared in fascination at the tiny figures; many took photos.

The carvings' fine lines are distinct, though one imagines that they were made with primitive stone tools. The peculiar, repeated, cross designs on all the figures are puzzling. A delicate cross design can be found on the mastodon's feet, and its head features six incised lines.

We can only guess why so many ivory figures were left behind 30,000 years ago. Perhaps the Vogelherd Cave had spiritual significance. Their age alone makes these Ice Age figures something sacred. Many visitors study them for a long time and from all angles.

The Vogelherd (birds herd) cave is located in Germany, in the Lone Valley, just about one kilometer northwest of Stetten, and northeast of the Alp and Danube River country, in southwestern Germany.

This cave has produced many archeological finds from the Stone Age to present times. The world-renowned ivory carvings from the middle Aurignacian period were found in this cave. Finds include human skeletons, mammoth, bison, reindeer rhinoceros, all excavated during a 10-week archeological dig in 1931, by archeologist Gustav Rick from the Eberhard-Karls University of Tuebingen.