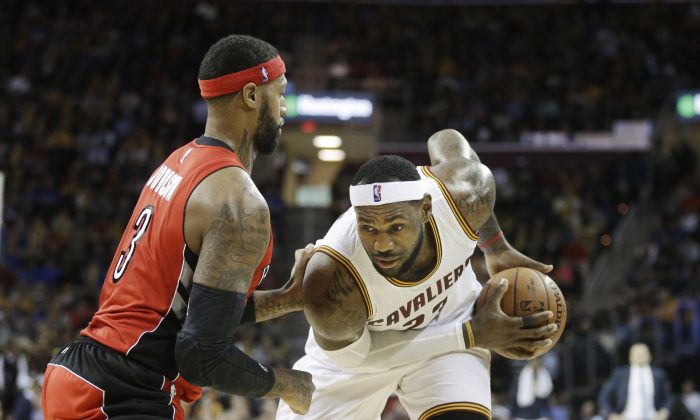 The Cleveland Cavaliers are on a big winning streak and the news and rumors are ramping up.

LeBron James is enjoying leading the Cavaliers, and is showing better leadership lately as the Cavs have reeled off eight straight wins.

He hit a key 3-pointer with 48 seconds remaining against the Toronto Raptors, and then yelled to the home crowd.

“That’s what I came her for,” James said, reported ESPN. He smiled as he recalled the moment afterward.

His star teammates are also having fun.

“We just have a good energy about us right now,” Kevin Love added.

A key part of the win was backup guard Matthew Dellavedova, who garnered six points, five assists, and three rebounds while playing every second of the fourth quarter.

“Delly is a guy that’s always been counted out,” James said.

“You know what I’m saying? ‘He can’t make it. He can’t do this. He can’t shoot enough. Not fast enough. Not tall enough.’ One thing about it: Heart and effort will take away a lot of the things that you cannot do. I’ll take a guy like that any day on my team.”

“He’s incredible. He’s awesome. I don’t know how else to say it,” Irving added.

Bleacher Report notes that the Cavs role players are finally beginning to shine, including Dellavedova, James Jones, and Tristan Thompson.

“Thompson has always brought a strong work ethic to the Cavaliers, and he didn’t utter a single complaint after being moved to the bench in favor of Love. Instead, Thompson has been the perfect big man to complement the offensive-minded Love,” it said.

“While scoring a solid 9.4 points on 53.4 percent shooting, Thompson’s strengths lie in his ability to clean the glass, play defense and set hard screens. Playing for a new contract next offseason, he’s become a favorite partner of James in the pick-and-roll, often finishing with highlight dunks.”

Toronto head coach Dwane Casey noted the impact of players outside of James, Irving, and Love.

“I thought we had (LeBron) under control most of the night,” he said. “But with that said, it wasn’t him that got the key rebounds down the stretch—that was (Matthew) Dellavedova, Tristan Thompson and different people on the boards.”

ESPN’s newest 25 Under 25 rankings has Kyrie Irving near the top.

TrueHoop‘s Amin Elhassan and David Thorpe debated how John Wall was just ahead of Irving (third and fourth, respectively, behind Anthony Davis and DeMarcus Cousins).

“I like Wall’s overall impact, what he can do defensively, he’s an elite athlete. He’s really the best athlete/passer at that position in the game. And I think he can’t shoot at all yet he’s becoming a dominant player,” said Thorpe, who had Wall third and Irving fourth.

“Whereas in Irving’s case, maybe the most skilled player not named Steph Curry–maybe even more skilled than Steph Curry–he’s a marvelous player, and I think he’s giving great effort on defense, I’m very happy to see what I see from Irving, but even with his best effort, he’ll never be the athlete that Irving is. I think Wall has a higher upside than Irving.”

“I struggled with that one, because of defense, not because of athleticism, because Wall is all-league at defense, especially at point guard, where it’s a tough matchup every single night,” said Elhassan, who had Irving at third and Wall at fourth.

He also said that he thinks both teams would be better if the two players were swapped.