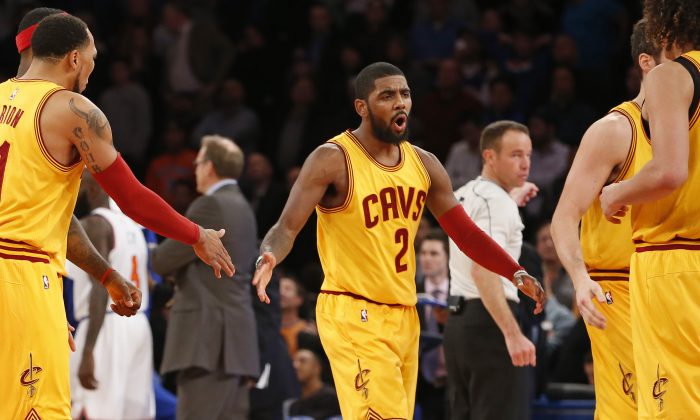 Cleveland Cavaliers guard Kyrie Irving (2) reacts while returning to the bench in the final minutes of the second half of an NBA basketball game against the New York Knicks in New York, Thursday, Dec. 4, 2014. The Cavaliers won 90-87. (AP Photo/Kathy Willens)
NBA

The Cleveland Cavaliers are preparing for their next game as the news and rumors ramp up.

The Cavaliers are now playing with LeBron James as the point guard on offense and Irving as the shooting guard.

“The result is what you see right now — Irving emerging as one the NBA’s elite players. Now, when he drives to the basket, he is decisive. When James has the ball, Irving is either moving to get open or he is finding some favorite spot on the court to await a pass,” reported Cleveland.com.

“James is setting up Irving for some open shots — Irving shooting a career-high .425 on 3-pointers. His .492 field goal percentage also is a career high. He’s averaging 22.4 points.”

Irving has also made a big effort to step up on defense, and is checking the opponent’s point guard.

“He has adapted faster to playing with James than Dwyane Wade did in Miami when they were paired up in 2010-11,” the blog said.

“And there are times in games when James defers to Irving, allowing the guard to take over. That happened twice last week — in victories over Milwaukee and New York.”

Fear the Sword noted that with James controlling the ball, 38 percent of Irving’s baskets are assisted, including 62 percent of his 3-pointers.

Irving is also finishing big in the paint, at 63.1 percent this season.

The blog also acknowledged that he’s been working hard on defense.

“Irving may never be a lockdown defender, or a pass first point guard, but the Cavs play really well when he is on the court.”

Waiters Willing to be Patient

Dion Waiters, now relegated to the bench, says he’s willing to be patient as long as the Cavs are winning.

The Cavs are on a nice six-game winning streak, but Waiters hasn’t been doing well.

During the streak, he’s shooting just 30.2 percent from the field, and averaging just 6 points.

But Waiters is confident that he’ll snap out of the slump.

“I’m going to find it,” said Waiters. “I’ve been through this my first two years. Not like this, but you know, I haven’t been through this.” Waiters also said that coach David Blatt agreed to try to run more plays for him.

James also expressed confidence in him.

“I think all of us, we know he’s a very, very good basketball player,” James said.

“And when his number is called, I think the best thing is to come in with a lot of energy and effort and you can’t worry about the ball going in. All of us, we all know that. We can’t control it. It’s a make-or-miss league. One thing you can control is how hard you play and how much you give to the team, how much you sacrifice for the team and we’re all trying to do that.”

Thompson Getting it Done

Tristan Thompson has been quietly playing well for the Cavs this season off the bench.

Thompson, who started every game over the past two seasons, is now playing 25.3 minutes per game and has only started once.

But he’s still putting up 9.1 points on 51 percent field goal shooting, along with 6.4 rebounds–evenly split between offensive and defensive.

And some games he’s getting much more time, such as the 32 minutes in the 105-91 over the Toronto Raptors on Friday, during which he scored 21 points and grabbed 14 rebounds.

“He’s a starter for us,” Blatt told reporters after the win.