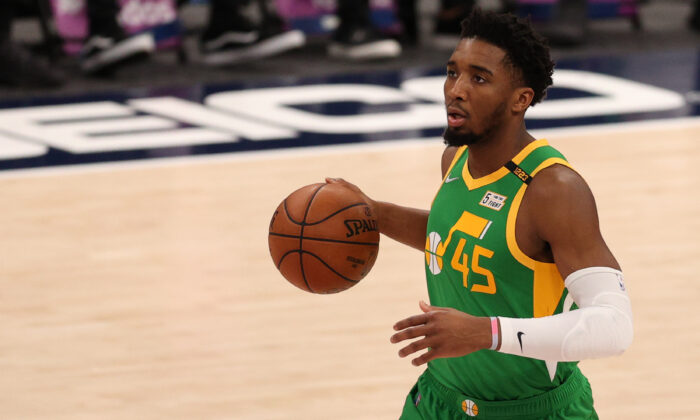 Donovan Mitchell (45) of the Utah Jazz dribbles the ball against the Washington Wizards during the first half at Capital One Arena in Washington, DC, Mar. 18, 2021 (Patrick Smith/Getty Images)
NBA

CLEVELAND—The Cleveland Cavaliers have agreed to acquire All-Star guard Donovan Mitchell in a blockbuster trade with the Utah Jazz, a person familiar with the deal told the Associated Press on Sept. 1.

The teams have agreed to move Mitchell to Cleveland for several players, said the person who spoke on condition of anonymity because the NBA still has to approve the trade.

The other particulars of the swap are not yet known.

ESPN was the first to report the trade.

Mitchell is one of the league’s elite scorers and his acquisition could put the Cavs, who won 44 games last season with a young nucleus, among the top teams in the loaded Eastern Conference.

Mitchell, who averaged 25.9 points per game last season, will pair with All-Star point guard Darius Garland and he’ll play along with All-Star center Jarett Allen and forward Evan Mobley, who had a strong rookie season.