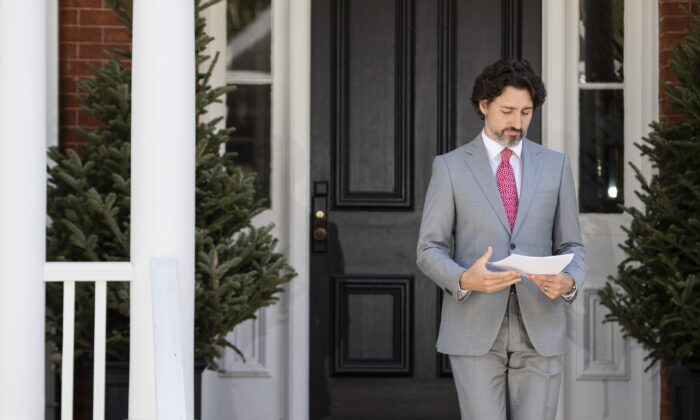 Prime Minister Justin Trudeau arrives for his daily news conference on the COVID-19 pandemic outside his residence at Rideau Cottage in Ottawa, on May 20, 2020. (Justin Tang/THE CANADIAN PRESS)
Canada

OTTAWA—As Canada slowly emerges from COVID-19 lockdowns, its chief public health officer told the country on Wednesday to temper expectations and continue to take precautions to prevent a resurgence of the illness.

The heightened vigilance, Tam said, is necessary to buy time so that a vaccine and other therapies could be found to better curtail the spread of the virus over the coming months.

“I know this may not be the grand reopening we might have liked, but we won’t get through this on hope alone,” Tam said.

Tam also said the differing paces provinces are taking towards reopening are to be expected. Ontario and Quebec still account for the vast majority of new COVID-19 cases and the Maritimes in particular, have emerged as an oasis of good pandemic health.

“Whatever pathway down this curve, there is no one size fits all,” said Tam.

“There’s a balance between the need to reduce the spread of disease compared to all the other needs from a health, social and economic perspective.”

Alberta’s Kenney acknowledged that balance as he announced that starting immediately, foreign travellers arriving at airports in Edmonton and Calgary would have their temperatures checked using an infrared camera.

New arrivals will also be asked to provide detailed plans on how they plan to self-isolate for 14 days, he said. That’s in keeping with federal requirements imposed weeks ago.

In two weeks, a similar screening process will be set up at the Coutts border crossing on the Alberta-Montana border. Canada and the U.S. have extended their border closure to non-essential travel to June 21 but truckers with goods are allowed through, as are certain workers and Canadians returning home.

“Countries that most successfully avoided severe outbreaks, like South Korea, Singapore and Taiwan, closed their borders from COVID-19 hotspots weeks before Canada did,” said Kenney.

“Given that airports and border crossings remain a high-risk vector for transmission, and at the same time a crucial part of the infrastructure we need to get our economy moving, we need to do more ? especially as we move towards relaunch.”

Kenney said that while the Trudeau government has taken laudable action on shutting down the border it was needlessly late to the task.

Trudeau said the federal government, in talks with the provinces, is considering tougher surveillance measures for new international travellers in the coming months, especially if Canada’s border restrictions are eased and more travellers are allowed into the country.

“A key part of reopening and keeping our economy going and controlling future spreads of COVID-19 will involve being very, very careful that we’re not importing new cases, even as our economies open up, even as border restrictions are potentially loosened down the road,” the prime minister said.

“We need to make sure we have the measures in place to be able to ensure new cases aren’t arriving and spreading through the general population.”

Trudeau also leaned on reluctant commercial landlords, urging them to apply for rent-relief programs in higher numbers—and dangling a post-pandemic scenario of empty offices if they don’t start playing nice with struggling tenants trying to keep their businesses afloat.

“With many people discovering that we can work from home to a much greater degree there may a lot of vacancies in commercial buildings over the coming months and years. Who knows what the post-pandemic world will look like, exactly?” Trudeau mused.

Ontario Premier Doug Ford, for one, has pleaded with “vicious” landlords to be flexible with business tenants during the pandemic.

On Wednesday, Ford railed against low COVID-19 testing numbers and warned he would bring back old restrictions if new cases continue to rise—one day after Ontario started the first stage of its reopening plan that includes retail stores allowing restricted access to customers.

Fewer than 10,000 tests had been completed in each of the last three days, which represented half or even a third of last week’s testing rate. That’s partly due to the province’s finishing a push to test everyone in long-term care settings. But the number of news cases remained steady in Ontario.

“We’re watching the trends like a hawk right now,” Ford said. “We won’t hesitate to roll things back if necessary.”

In Quebec, Deputy Premier and Public Security Minister Genevieve Guilbault said limited outdoor gatherings will be permitted as of Friday, while dentist offices across the province—and hair salons outside the Montreal and Joliette regions—can reopen on June 1. Quebec, Canada’s worst-afflicted province, continues to record a downward trend of new COVID-19 cases.

Manitoba announced no new COVID-19 cases Wednesday, after registering one in the last eight days. As of Friday, the province will allow larger gatherings of people—25 for indoor events and 50 outside, up from the current limit of 10.

New Brunswick, meanwhile, took a victory lap as the province marked two weeks without any new COVID-19 cases. The province’s chief health officer said all 120 people with confirmed cases in the province have recovered, with no deaths.

And that, declared Dr. Jennifer Russell, has made New Brunswick the envy of Canada and much of the world.