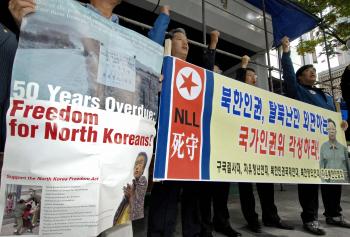 On March 17, American journalists Laura Ling and Euna Lee were arrested at the North Korea-China border and then unreasonably sentenced to 12 years in a labor camp by North Korea’s top court. They were released after four months of suffering, after former President Bill Clinton’s “private” visit to North Korea.

The incident has been widely interpreted as a kind of blackmail used by Kim Jong Il’s communist regime to improve the difficult diplomatic situation caused by its missile tests.

On July 31, Taiwanese Falun Gong practitioner Ms. Shao Yuhua and her daughter, both naturalized Taiwan citizens, were arrested by China’s State Security Bureau (SSB) in Hebei Province when they were visiting Yuhua’s sister. The SSB threatened them and attempted to force Shao to give up Falun Gong by writing a statement repenting of her practice. They were released after one week of intensified international rescue efforts.

For many years, the United States has been trying to engage North Korea into peaceful talks over the nuclear weapon issues, and some politicians have been putting their hopes on the Chinese Communist Party (CCP) regime playing a constructive role. Yet, North Korea breaks the promises it makes after each round of negotiations.

Over and over again, the Chinese regime has just urged that peaceful talks take place, without exerting substantial pressure on North Korea. In fact, the CCP could topple Kim Jong Il’s regime in just a few days if it wanted to.

Why the CCP doesn’t want to exert pressure on its little brother is not difficult to understand. North Korea is one of the few regimes that share the same communist ideology. From a more fundamental point of view, Shao’s case reveals how similarly the CCP and Kim’s regime behave. To reach their goal, neither hesitates to resort to the most contemptible means, such as kidnapping Ms. Shao, and they don’t care how the international society regards them.

It has been reported that the CCP had framed and threatened a Japanese consulate employee, a democratic candidate running for the Hong Kong legislative council, and an Australian Mayor, in each case accusing them of associating with prostitutes. This is reminiscent of the tricks used by KGB during the Cold War period.

Such incidents should ensure a serious re-evaluation of our strategy towards totalitarian regimes. We all understand that a soft approach will never work for thugs and that their promises and the beautiful appearances they create can never be trusted. While we are trying to engage totalitarian regimes such as North Korea and the CCP, we have to remember to see through their tricks.

These regimes have mastered the technique of talking sweetly while subverting the cases under the table. What counts is not what they say, but what they do. We need to seriously assess what they do and what contribution they make, no matter what subjects we need to speak with them about.