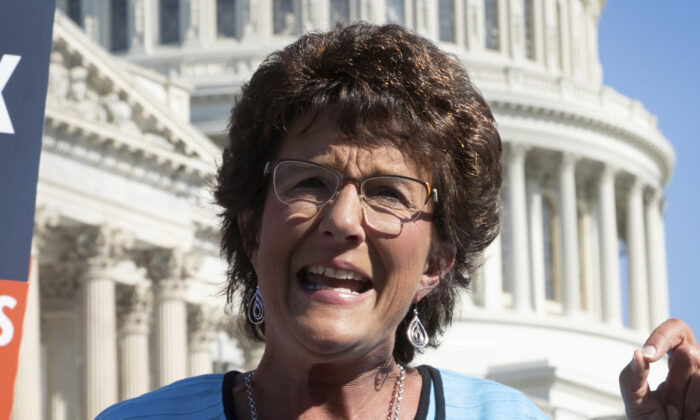 Cause of Car Crash That Killed Rep. Jackie Walorski Revealed

The Elkhart County Sheriff’s Office in Indiana revealed the cause of the car crash that killed Rep. Jackie Walorski (R-Ind.) and three other people last month.

Zachery Potts, the driver of the Toyota RAV4 SUV, was found to be at fault, according to the sheriff’s office in a statement over the past weekend. The vehicle was driving left of the center median at excessive speeds when it hit a Buick.

The statement notes that Potts was trying to pass another vehicle on a two-lane roadway when the collision occurred.

A witness to the accident was “traveling northbound behind both the Toyota RAV4 and the unidentified truck,” according to the sheriff’s office.

“The Toyota was observed slowing, as what was described as creating distance between the truck and the Toyota. The Toyota was then observed accelerating to a high rate of speed, closing the distance to the unidentified truck. As the Toyota neared the rear of the truck, it swerved into the southbound lane at which it collided with the southbound Buick driven by Edith Schmucker,” according to sheriff’s officials.

Walorski, Potts, Schmucker, and Emma Thomson—another of the congresswoman’s staffers—all died in the crash, officials have said.

Prior to her election in 2012 to the House, Walorski served three terms in the Indiana Legislature, spent four years as a missionary in Romania along with her husband, and worked as a television news reporter in South Bend, Indiana, according to a biography posted on her congressional website.

Walorski was a lifelong resident of Indiana, according to her official biography. She served on the House Ways and Means Committee and was the top Republican on the Worker and Family Support Subcommittee.

Biden said last month that he and Walorski “may have represented different parties and disagreed on many issues, but she was respected by members of both parties for her work on the House Ways and Means Committee on which she served.”