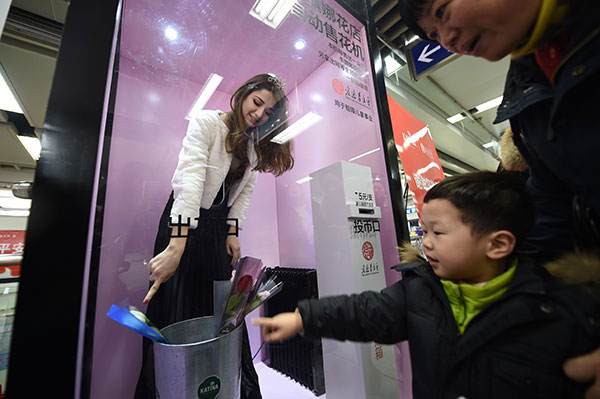 In the latest episode of bizarre odd jobs taken up by Westerners living in China, two white models have gained attention for taking turns standing behind a glass showcase and handing roses to passerby for 5 yuan (less than a dollar) a flower.

The man and woman, both brunettes, were working for Katina, a florist in Nanjing, eastern China. The showcase is located in a subway stop and has two receptacles for cash and flowers.

The strange business benefits a charity supporting mentally disabled children in undeveloped parts of China—for each flower sold by the underground “vending machine,” Katina will donate the same amount to the Aide Foundation in Nanjing.

Ms. Li, a customer interviewed by the state-run China News Service, said that she was initially drawn to the attractive foreigner behind the glass, but bought two roses once she learned about the charity effort.