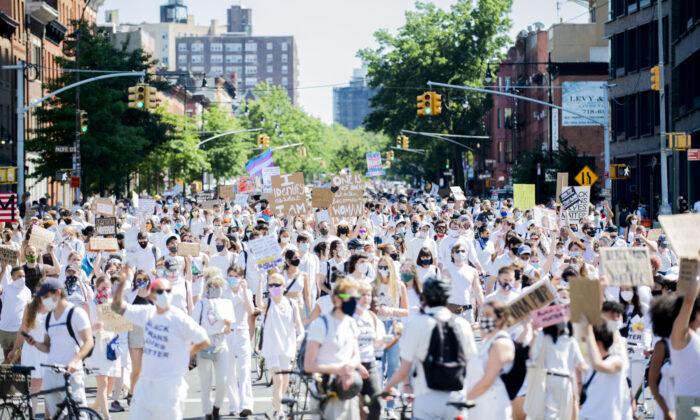 In a lawsuit filed in the federal court for the Northern District of New York, the plaintiffs claim that Cuomo, James, and de Blasio have demonstrated a double standard by allowing mass protests for causes they favor while cracking down on religious congregations. Cuomo’s numerous executive orders specifically singled out religion for regulation under the lockdown regime, the lawsuit claims.

“These orders, both the emergency stay-at-home and reopening plan declarations, clearly discriminate against houses of worship. They are illegally content-based, elaborate, arbitrary, and pseudo-scientific,” Christopher Ferrara, the attorney for the plaintiffs and the special counsel at the Thomas More Society, said in a statement.

“The governor and his agents, along with New York City’s mayor, have employed favoritism and political platforms against people of faith.”

Cuomo and James didn’t respond to requests for comment.

“The City has to adopt and follow the Governor’s Executive Orders,” de Blasio’s office said in a statement emailed to The Epoch Times.

The lawsuit points to the clashing realities, documented in videos posted on social media, of police officers clearing Jewish children and mothers from a playground in Brooklyn not long before the city allowed tens of thousands to gather in the same borough in support of “black trans lives.” Days prior to the enforcement at the playground, de Blasio appeared at a political protest in the same borough and spoke while not wearing a mask.

On June 14, a massive crowd gathered in the courtyard of the Brooklyn Museum for a “Black Trans Lives Matter” rally. A day later, city workers were recorded welding shut a gate to a large playground in a predominantly Jewish community.

The lawsuit was filed by Rev. Steven Soos and Rev. Nicholas Stamos who serve for the same ministry in upstate New York. Joining the priests are three Orthodox Jews from Brooklyn: Daniel Schonborn, Elchanan Perr, and Mayer Mayerfeld. The plaintiffs claim that the state has explicitly engaged in the regulation of religion by singling out congregant worship in the initial lockdown orders and the subsequent reopening orders.

Meanwhile, the lawsuit claims, de Blasio and Cuomo have endorsed the mass protests in the wake of the police-custody death of George Floyd, including a protest the mayor attended in person. The lack of a spike in new cases after the George Floyd protests around the country, in addition to other large gatherings elsewhere, suggest that the science underlying the lockdowns “was flawed at best and should no longer deter judicial intervention in defense of First Amendment liberty for all, not just the groups and activities defendants favor,” the plaintiffs say.

The plaintiffs call on the court to block the enforcement of the executive orders and to ultimately declare them unconstitutional.

“It is time to end New York’s experiment in absolute monarchy,” the lawsuit states.