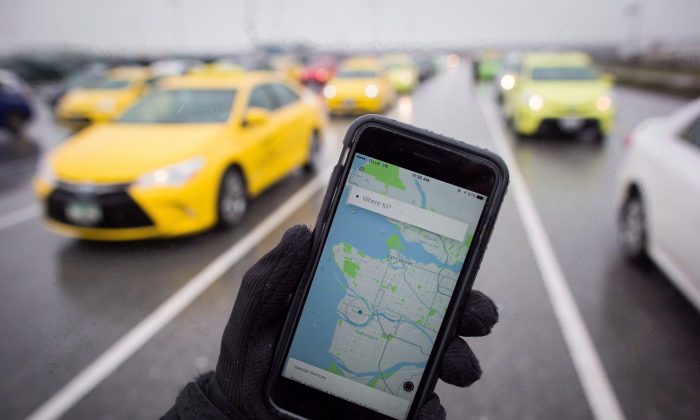 The Uber app is displayed on an iPhone while in the background taxi drivers wait for passengers at the Vancouver International Airport on March 7, 2017. (The Canadian Press/Darryl Dyck)
Viewpoints

Catching a Ride on the ‘Creative Destructive’ Economy

As the taxi industry faces off with Uber, governments should let the marketplace decide the winners and losers

What do creation, destruction, sharing, and profit have in common? When it comes to the sharing economy, the answer is “everything.”

In slightly over a decade, Uber and Lyft have gone from San Francisco startups to worldwide juggernauts. Their march to becoming international multibillion-dollar companies has sometimes met fierce resistance from taxi companies and community groups led by hospitality unions.

Governments that feel caught between competing commercial interests (not to mention groups of consumers) should let the marketplace sort out winners and losers.

“Creative destruction” was defined by economist Joseph Schumpeter in 1942. In Capitalism, Socialism and Democracy, he noted that new markets and organizational development revolutionize “the economic structure from within, incessantly destroying the old one, incessantly creating a new one. The process of Creative Destruction is the essential fact about capitalism. It is what capitalism consists in and what every capitalist concern has got to live in.”

Will taxi drivers feel the pinch in the 633 communities that Uber operates in? Yes. A company worth US$50 billion must have a substantial market share of the taxi business.

Will neighbourhoods and hospitality unions be affected when Airbnb claims four million listings in 65,000 cities? Yes. How could they not?

But in a world where the one constant is change, all of us must change too or be left behind. Had we not done so in the past, we would still be heating our homes with wood fires and travelling on horses and donkeys. For those who can accept it, the oil industry saved a lot of trees, yet that also put woodcutter jobs on the chopping block. Charioteers climbed off their seats and into vehicles. Maybe some became cab drivers.

Fast-forward to today and cabbies are wary of Uber drivers with their GPS guidance, surge pricing algorithms, and flexible work hours.

The good news, even for them, is that such an impact is more minimal than it seemed initially. A 2017 study conducted by Carl Benedikt Frey of the Oxford Martin School showed that in the United States, the presence of Uber led to a 10 percent drop in income for salaried taxi drivers and a 10 percent increase in the earnings of self-employed cabbies, whose number grew by 50 percent. This means that Uber increased the market for ride-sharing instead of taking jobs or income from taxi drivers.

Thanks to its famous ride-sharing companies, San Francisco has 1,500 taxis and 45,000 ride-sharing drivers, most of whom work less than 10 hours a week. New York City has eight times the population of San Francisco but has just 55,000 Uber drivers and 13,000 taxis. The ratio of taxis per capita is very similar in the two cities, but the ride-sharing services had a head start in San Francisco and the movement probably hasn’t reached its true demand in New York.

Inadequate parking and increased congestion in many large cities create challenges for policy-makers. But saving the taxi industry for that industry’s sake is not and should not be a priority of a government.

Let no one forget that Uber and Airbnb could yet go the way of Myspace and Netscape. Being a dominant player early in a new medium doesn’t guarantee a permanent place. New technology, such as driverless cars, will bring more innovation to the marketplace and greater challenges to ride-sharing companies.

If that means the downfall of Uber, should policy-makers struggle to save it?

Lee Harding is a research associate for the Frontier Centre for Public Policy.