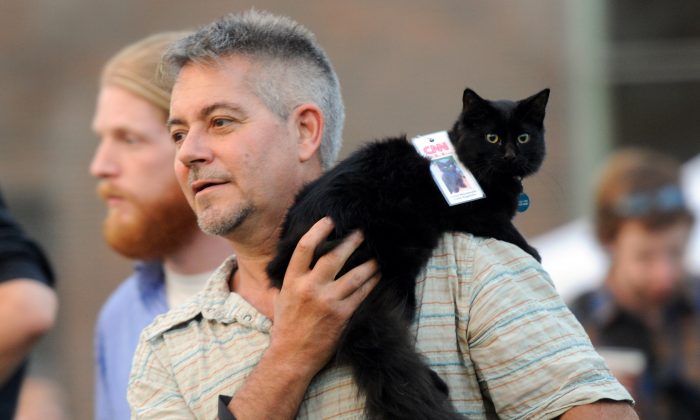 George Larson of Minneapolis hurries to find a place with his cat, Fiona Mekenzie, as they arrive at the The Walker Art Center for the first Internet Cat Video Film Festival, showcasing the best of cat films on the Internet, in Minneapolis, Minn., Aug. 30, 2012. (AP Photo/Craig Lassig)
New York

NEW YORK—Watching funny cat videos has become a ubiquitous pass time for almost everyone who’s browsing the Internet. This Friday, thousands visitors not only got together for the now-popular Cat Video Film Festival, they also dressed up as their favorite felines, ahead of Halloween.

“The Walker Art Center’s Internet Cat Video Festival was conceived as a modest celebration to bring online communities together in the real world,” read the event description on their Facebook page.

The inaugural festival last year started out as an offshoot of the Minneapolis Walker Art Center’s festival. Organizers received more than 10,000 video submissions from cat owners, claiming their ticket to Internet fame.

One of the most popular cat videos on Youtube, “Keyboard Cat,” garnered 33 million views since it’s introduction to the video-sharing website in 2007.

This Friday, cat video fans, were invited to participate in the second edition of the festival that showcased some of the most popular shots of the furry friends. From the 6-second Vine videos to short films, including classics and festival exclusives, attendees could ogle over 75 minutes of “feline film fun,” for the price of $20 per person.

Over a thousand people confirmed on the Facebook fan page that they would attend the festival.

“Each festival date draws from feline and human talent in the local community to make a unique audience experience,” the page read. The festival is touring the U.S. and then transferring to Europe.

This surely was the scene in Brooklyn’s Williamsburg neighborhood, where attendees came dressed up in cat ears and painted-on whiskers. They offered their insights on how cats became an Internet sensation.

“The cute factor is very important,” said Steve Lozic, 28, while waiting for the show to begin at the Warsaw concert venue, where the festival was hosted.

Neysa Smith, 22, who works in advertising, said cats are smarter than dogs, so their videos are more popular.

“Cats are the best animal ever,” Smith said.