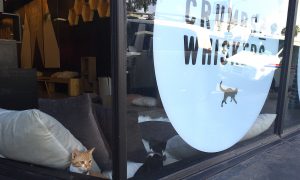 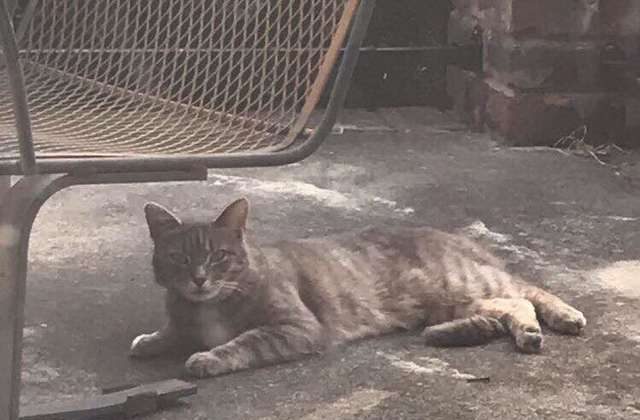 A cat lays on the ground. (Shea Belew Brennaman)
US News

ESSEX, Mass.—A Massachusetts family says a pet cat who went missing five years ago has returned home after the feline was unexpectedly found.

Elinore Repucci had let her tabby cat Larry out for a walk in August 2013, but he didn’t come back after walking out the door. Repucci tells the Newburyport Daily News she and her family spent the next few weeks frantically searching for Larry.

Repucci says she eventually resigned herself to thinking an animal killed Larry, as her home was near the woods.

But an animal rescue shelter in Salisbury, Massachusetts, about 20 miles from her home, called her Thursday, March 14, and said they found a cat with a microchip registered to her.

Countless kittens used for research on harmful parasites and then euthanized could be granted a new lease on life if new rules introduced in Congress are passed.

The bipartisan and bicameral Kittens In Traumatic Testing Ends Now Act, or KITTEN Act, aims to find more humane alternatives to the U.S. Department of Agriculture’s (USDA’s) current practice of euthanizing kittens after they are used in agency research on toxoplasmosis–a disease caused by the Toxoplasma gondii parasite.

The parasite infects between 13 and 40 percent of population in the United States and United Kingdom, according to the USDA. Although it does not cause serious symptoms of illness in most adults, it can cause blindness and mental retardation in congenitally infected children.

Senator Jeff Merkley (D-Ore.) and Rep. Jimmy Panetta (D-Calif.) introduced the KITTEN bill on March 7. The proposed legislation does not intend to stop the research, rather just save the kittens from being put down, and has already attracted support from Senator Cory Booker (D-N.J.) plus a group of more than 20 bipartisan U.S. representatives.

“The USDA’s decision to slaughter kittens after they are used in research is an archaic practice and horrific treatment, and we need to end it,” Merkley said in a public statement. “The KITTEN Act will protect these innocent animals from being needlessly euthanized in government testing, and make sure that they can be adopted by loving families instead.”

Today, @SenJeffMerkley and I are introducing the bipartisan, bicameral #KITTENAct to end the U.S. Department of Agriculture (USDA) practice of killing kittens after they’re used in agency testing. https://t.co/nh1xHEy2tE

If passed, the bill would require the USDA to uphold basic animal welfare standards, and the kittens would be fully protected by requiring the Secretary of Agriculture to end the use of kittens and adult cats in any USDA experiment that unnecessarily harms the animal.

“While I strongly support scientific research, taxpayer money and federal resources should be spent on advancing scientific research in an ethical manner, not on inflicting pain on kittens or killing them after they are used in agency testing,” Panetta said. “I hope this bill helps us get closer to ending this cruel practice.”

The U.S. Dept. of Agriculture is WAY out of line breeding cats just to feed them parasite-ridden raw meat and then kill them even though they’re perfectly healthy. Our bipartisan KITTEN Act will put an end to this abusive and unnecessary practice for good.https://t.co/NIGqEiP5Q5

Since 1970, the Animal Parasitic Diseases Laboratory in Beltsville, Maryland, has invested $650,000 a year into research and testing on kittens that eventually get put down by the USDA. Animal rights advocates accuse the lab of breeding up to 100 kittens annually to be fed parasite-infected raw meat when they turn two months old. Feces are collected and parasitic eggs harvested for use in other experiments. The three-month-old kittens are then euthanized and cremated. Rights groups says that the kittens could easily be treated and adopted.

The USDA disputes the claim that it was experimenting on 100 kittens each year, saying the figure is inflated.

It also maintains that the animals used in the “life-saving research” have to be euthanized to stop the parasite from infecting people, although this has been disputed by the Centers for Disease Control, American Veterinary Medical Association, and Association of American Veterinary Medical Colleges, who say that the kittens can be kept safely as pets after they have been treated with the antibiotic clindamycin.

Merkley is using wording in the Senate Appropriations Committee agricultural bill to urge the USDA to consider alternative testing methods to infecting and killing kittens. The USDA announced in 2018 it had started looking for alternatives to the kitten testing.

Kittens should be in loving homes, not government labs. My KITTEN Act will prevent the government from needlessly euthanizing kittens when they can be adopted by families instead. RT if you agree. pic.twitter.com/28u5eeKqXN

“3,000 kittens killed and $22 million squandered for decades of cruel and unproductive USDA experiments is tragic whether you care about government waste, animal protection or both,” Project Public Policy Manager Noelle Callahan said. “Like a majority of Americans, our two-million-plus members want this nightmarish program ended and we applaud Senator Merkley for his outstanding leadership to end the USDA’s taxpayer-funded kitten slaughter.”

“Continuing to breed and kill perfectly healthy kittens for toxoplasmosis research is unethical and unnecessary, and I’m grateful to Senator Merkley for introducing the KITTEN Act to stop it once and for all,” said Animal Planet Guest Expert Hannah Shaw, who is also founder of animal advocacy project Kitten Lady.

Separately, the U.S. government recently revealed that it was extending an agreement with the University of California–San Francisco to supply researchers at the Department of Health and Human Services (HHS) with fetal tissue sourced from aborted babies for implanting into mice.

It is the second time HHS has opted for a 90-day extension instead of a year-long agreement as the department reviews its use of fetal tissue for moral, ethical, and other concerns.

Since 2013, HHS has been paying over $2 million a year of taxpayer money for a steady supply of about 100 mice a month, 90 of which are implanted with human fetal thymus and liver tissue. The mice are used for testing HIV drugs.

The Epoch Times reporter Richard Szabo contributed to this report.