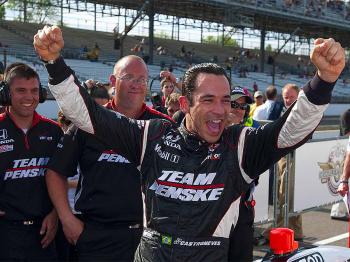 By James Fish
Print
Three-time winner Helio Castroneves, driving for Team Penske, has grabbed the pole for the 2010 Indianapolis 500 with a four-lap average of 227.971 mph last Saturday.

Will Power put his Penske car in the middle of Row 1 with a speed of 227.578 mph. Dario Franchitti soiled the Penske front-row sweep by qualifying his Target-Ganassi car on the outside of Row 1 at 226.99 mph

Castroneves went out first in the final round of qualifying and had to sit on the sidelines as the track got quicker and his competitors came closer and closer to his time.

“It’s incredible. I’m speechless right now,” Castroneves told Versus. “Sitting in the car for an hour-and-a-half was not easy at all, seeing everyone getting closer and getting closer. I cannot handle that much of pressure,” he joked.

“It’s 1–2 Team Penske. It’s a shame that Ryan [Briscoe] didn’t have his chance at a last one but it’s all credit to the entire three guys we are working together. It’s only one guy—it’s me—but the good news is all three of us can benefit from that.”

Castroneves’s time and speed was significantly faster than the rest of the field. Castroneves said he had to just hold down the pedal and hang on.

“228! I honestly wasn’t even looking to the time. I was just so close. The car was moving and moving, I’m like ‘Please, just let me finish this run.’”

Castroneves is focused on winning his fourth Indy 500, something few other drivers have done. He understands how difficult a feat that could be and how much he depends on his crew to get him there.

“Certainly it’s the best place to start; now we’ve got to go for 500 miles, so everybody cross their fingers.

“It’s a team effort. Now we’ve got to continue working four times, guys, four times harder to make sure that we can accomplish something very impressive.”

The 94th running of The Indianapolis 500 will happen on May 30, 2010, at Indianapolis Motor Speedway (IMS.) Coverage of the race starts at Noon EDT on ABC-TV. Tickets are available at the IMS ticket web page.