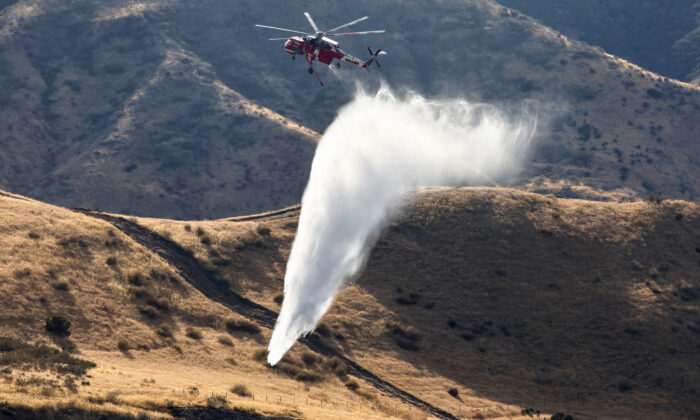 A firefighting helicopter drops water as firefighters stand near a hotspot a day after the Route Fire burned through the area near Castaic, Calif., on Sept. 1, 2022. (Mario Tama/Getty Images)
Southern California

CASTAIC, Calif.—Firefighters laboring under intense heat continued making dogged progress against a large brush fire in the Castaic area, with containment up to 91 percent on Sept. 4.

Cal Fire reported the 91 percent containment figure Sunday morning. The Los Angeles County Fire Department and the Angeles National Forest were working as a unified command, with 248 personnel battling the fire Sunday, down from 467 a day earlier.

The two right lanes of the northbound Golden State (5) Freeway between Lake Hughes Road and Templin Highway were expected to stay closed through the holiday weekend, Caltrans reported.

Retaining walls burned, and structural engineers must inspect wall integrity before any load is put on lanes, Caltrans said.

Ridge Route Road remained closed between Templin Highway and Pine Crest Place to all but local access and emergency crews.

The fire threatened 500 homes at one point last week, and briefly caused some areas to be evacuated Wednesday and Thursday.

The seven firefighters who suffered heat-related injuries Wednesday have all been released from the hospital and were “doing well,” authorities said.

There were no reports of any other injuries.

One home along Ridge Route was destroyed, and a separate outbuilding in a different location was damaged, Angeles National Forest Fire Chief Robert Garcia said Thursday.

“There was a lot of opportunity with this fire behavior yesterday [Wednesday] for this to go far worse than it did,” Garcia said. “So, thanks to our partners for keeping the public and our firefighters safe.

“The headline for us on the Angeles National Forest is going to be the conditions we’re in now,” he told reporters. “The fire behavior and what you saw yesterday should be a wake-up call to us all about the potential that we’re in and we’re entering into over the next few days in terms of the fire conditions. Very rapid fire growth and very, very explosive fire behavior.

“And so the message from the Angeles National Forest … is that the days ahead are going to be very challenging,” he said. “So we ask for full cooperation for our public that’s visiting the national forest and those that live in and around the national forest, that based on those conditions we please ask you to heed the warnings of our conditions, our fire danger level, and our fire restrictions and of course closures and evacuations should a fire emerge in your area.”

Los Angeles County Supervisor Kathryn Barger, who represents the area, hailed the “Herculean” efforts of fire crews braving the heat and difficult terrain to beat back the flames.

“Their labor is also a reminder for us all to practice responsible and safe recreation as the Labor Day holiday approaches,” Barger said in a statement. “Most wildfires are caused by human carelessness. Campfires, discarding lit cigarettes, playing with fireworks—all can trigger a blaze. We all need to do our part to keep our communities safe.”