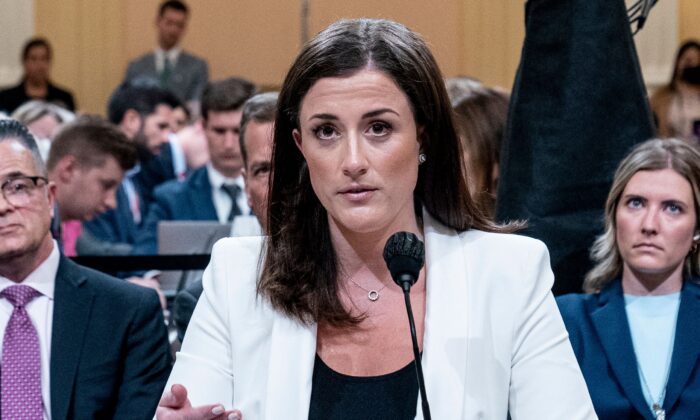 Cassidy Hutchinson, a top former aide to Trump White House Chief of Staff Mark Meadows, testifies during the sixth hearing by the House Jan. 6 committee on the U.S. Capitol in the Cannon House Office Building in Washington on June 28, 2022. (Andrew Harnik/AFP via Getty Images)
Jan. 6 Coverage

Cassidy Hutchinson Testimony at Jan. 6 Hearing Would Be Inadmissible in Real Court: Attorney

Most of Cassidy Hutchinson’s testimony this week in front of the Jan. 6 Committee would not be allowed in court, according to Pennsylvania Republican trial attorney Wally Zimolong.

Hutchinson, 25, is the former aide to President Donald Trump’s chief of staff Mark Meadows. She testified that Trump protested in a car when a Secret Service agent told him they would not take him from the site of his speech to the Capitol where people were gathering. Trump lunged for the car’s steering wheel and then toward the agent, she told the committee.

But Hutchinson was not in the car. She relayed a story she heard about the car ride.

“None of that would ever be admitted in court. It’s classic hearsay,” Zimolong told The Epoch Times. “An attorney would get up and say ‘Objection, hearsay,’ and every single judge in America would say ‘Yeah, you’re right. You can’t testify to what someone told you, or what someone said.’ It’s the first thing you learn in evidence class in law school.”

This illustrates the larger problem with the Jan. 6 hearing, Zimolong said: There is no cross examination so only one controlled side of the story is being told.

“This person is being exalted as a star witness, but if she walked into a civil or criminal courtroom and tried to offer that testimony, most of it wouldn’t even be allowed. She would be shut down immediately by a judge, so I don’t think she’s a star witness at all. From a lawyer’s perspective, this committee is a total sham.”

Anyone who cares about justice should be concerned.

“If you think that the events of Jan. 6 were unAmerican and unbecoming of our American system of government, I don’t know how you can’t think this Jan. 6 Committee and the way this is playing out is not equally unbecoming,” Zimolong said. “They’ve completely dispensed with the rule of law and due process. This investigation has expanded and in a way that is political persecution, something I never thought that I would see in this country.

“If you care about that type of thing, it shouldn’t matter if you think Trump is the worst person in the world. I think there are certain lines that we shouldn’t cross in this country, including prosecutions and investigations that are politically motivated.”

Zimolong believes anyone who is being honest can see the Jan. 6 Committee is about politics, and without cross examination, it’s impossible to get to the truth.

“In the Jan. 6 Committee, there is no opportunity to cross examine the witnesses that have been presented against the president. That doesn’t mean that those witnesses are lying. But it begs the search for the truth.

“When you when you cross examine somebody, or somebody gives testimony under oath, it’s not a binary choice of, ‘Is the witness lying, or is the witness telling the truth?’ It’s more nuanced. It’s critical that what they be saying is put in context, and they explain their basis for making certain statements. That can only be borne out when an adversary has a chance to cross examine the witness.”

Using the example of a car crash, Zimolong explained a witness might testify that there was a vehicle speeding down the street that crashed into another vehicle. In the mind of the witness, that is true.

But in cross examination, the witness is asked how they know the car was speeding. The witness explains that they heard the engine revving but their back was turned, and they did not see the vehicle or the crash.

“Both are truthful, but it’s a much different story at that point,” Zimolong said. “I think anybody would agree that the gravity of the testimony is significantly diminished, just by that line of questioning—that single fact that the witness heard it and deduced that there was a high rate of speed, rather than seeing it. All these things are important, and that’s why you have an adversarial system.”

The question to ask the folks supporting the Jan. 6 Committee, he says, is this: If they were charged with a crime, would they rather their case be adjudicated in a court where they have the right to cross examination, a right to present evidence that is in their favor, and a right to confront their accusers? Or are they okay with having their guilt or innocence hinge on a hearing that is being conducted like that of the Jan. 6 Committee?

“I don’t think anybody could credibly say, ‘Oh no, I have no problem. Let my guilt or innocence lie on the same procedures as the Jan. 6 Committee,'” Zimolong said.