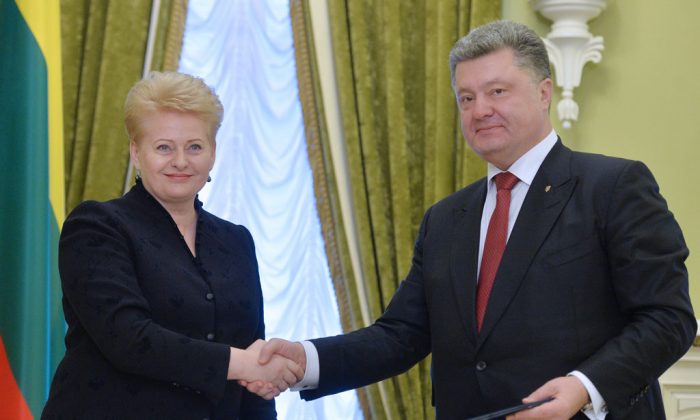 Lithuanian President Dalia Grybauskaite (L) and Ukrainian President Petro Poroshenko (R) shake hands after signing bilateral documents during their meeting in Kiev on Nov. 24, 2014. Grybauskaite promised military assistance for Ukraine as she slammed Russia's alleged 'terrorist' interference in a separatist insurgency in eastern Ukraine. Grybauskaite, one of Ukraine's strongest backers in its bid for closer ties with the West, promised that the Baltic state would use 'all support available' to help Ukraine militarily at a meeting with President Petro Poroshenko in Kiev. (Genya Savilov/AFP/Getty Images)
Crisis in Ukraine

DONETSK, Ukraine—For hours, small crowds in Donetsk huddle hopefully in the cold around cash machines that never get filled, as artillery rumbles in the distance.

Money is running short in the rebel heartland since the government announced this month that it will suspend banking services as it piles on the pressure. Almost all ATMs have stopped working and the remainder are expected to stop operating over the next two weeks.

The move is part of Ukraine’s plan to suffocate its separatist foe, now that its costly military campaign has foundered. Authorities say they are also withdrawing all state services from rebel areas, although hospital and school workers in the rebel stronghold of Donetsk say it has been a while since they last saw funding anyhow.

Yet if the government of President Petro Poroshenko hopes to turn people in eastern Ukraine against separatist leadership, the evidence on the ground suggests the strategy may only be hardening their resolve.

“What Poroshenko is saying to us is: ‘You are no longer Ukrainians. You won’t get pensions, you won’t get social payments. When you croak, then we’ll stop this war against you,'” said Donetsk retiree Georgy Sharov. “But I don’t want to go to Ukraine and beg for their mercy.”

The lines have typically formed in front of cash machines belonging to state savings bank OshcHadbank, which handles pensions and social support payments.

“Even they don’t always have money,” said Donetsk resident Sergei Smotovsky, standing outside a branch of the bank. “The worst thing is that not only can you not get social payments. You can’t even withdraw money that you earned, your salary.”

Even though cash machines don’t work, account-holders wait from early morning until lunchtime in the hope that bank workers will top them up, but the doors to the banks often remain firmly shut.

Despite the unremitting fighting taking place across Donetsk and Luhansk, the two regions affected by the armed separatist conflict, large supermarkets are still reasonably stocked.

Supplies come from other parts of Ukraine and customers often use bank cards to pay for shopping. Ukraine’s government is now about to block bank cards, cutting off another means of sustenance.

Hard-pressed recipients of state benefits have for months turned expectantly to the rebel government for cash. Crowds of pensioners and single mothers assemble daily before the separatist headquarters. When anybody in the crowd becomes especially vocal, one of the gunmen guarding the building rushes to bundle them away, accusing them of being “provocateurs.”

The brunt of the rage, however, is still directed at the Ukrainian government.

“Ukraine says Donetsk is Ukrainian territory, and yet they came here with tanks and weapons instead of paying pensions properly,” said Donetsk retiree Anatoly Visly. “I am a disabled veteran and I haven’t received my pension for three months.”

Many pensioners have re-registered in towns outside rebel zones, meaning payments have still accrued to their accounts. The challenge for those people will now become making the monthly trip to banks in government-controlled areas, which can be costly and difficult, especially for the most infirm.

Prospects for the rebels to set up a welfare system any time soon are bleak.

Anna Kharzhevskaya, an official with the rebel social affairs and labor ministry, said separatist authorities have only a crude notion of how many people are eligible for social payments.

Ukraine’s government has been blocking access to state records and is trying to spirit away hard copies of databases still in rebel-held areas, Kharzhevskaya said.

Separatist authorities say militiamen are under instructions to stop any unsanctioned removals of government records by Ukrainian authorities.

Without a properly functioning tax system in place, there is no immediately obvious and transparent way for money to be raised. As a result, Kharzhevskaya said she could not estimate when her department would begin paying regular pensions.

Things are even grimmer in the Luhansk region. Separatist command there is divided fractiously among the self-styled Luhansk People’s Republic and an assortment of armed Cossack leaders.

One Cossack commander, Pavel Dryomov, had to admit to rebel media that he had overextended himself in promising 500 hryvnia one-off payments ($35) to pensioners — grossly miscalculating the number of people who needed to be paid. “We had no idea of that figure,” he said in a video interview.

If hospitals are still working, it is in large part down to the sheer determination of the staff.

Viktoria Lubintseva, director of Donetsk central hospital, said the government had stopped providing funding since the start of November, well before Poroshenko announced the cutoff of state support.

“Medicine is usually bought by the patients as we need different kinds of medicines to do operations,” Lubintseva said. “Staff is working voluntarily because they sincerely want to help people, as their conscience dictates.”

As state support and cash supplies dwindle, reliance is growing on outside aid. Some of it is coming from Russia, but there are also substantial supplies being provided by the charitable fund of billionaire Rinat Akhmetov, whose wealth is built on eastern Ukraine’s vast industrial resources.

Despite such help, many in eastern Ukraine plan to leave: “It is impossible to live here,” Smotovsky said as he waited in vain outside the bank.